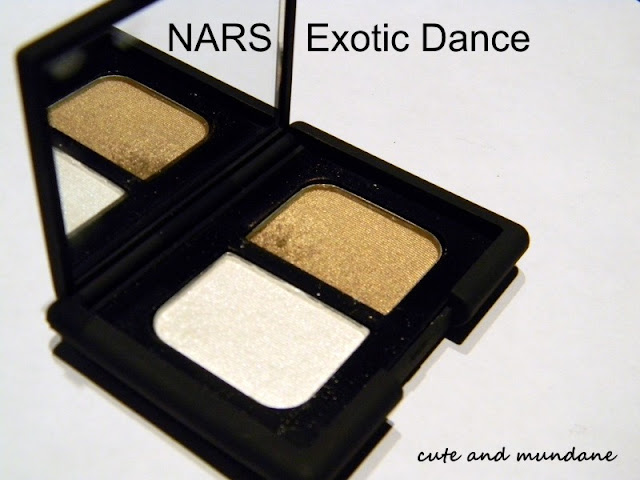 NARS Exotic dance is one tricky duo eyeshadow. I've put off my review of Exotic Dance to give ample time to play around and figure out exactly how to use it. The  colors look deceptively refreshing and beautiful together in the pan, however figuring out how to use them and then how to describe them has been an ordeal. Fortunately, I've had an energizing day, filled with a trip to the art museum, free tickets to a baseball game, and just now a slice of Trader Joe's Strawberry Rhubarb pie, so I feel ready to tackle that challenge today!

NARS Exotic Dance is one of two duo eyeshadows that were released in the NARS Summer 2011 collection. I think it's received less love than its smoky sister Dogon (previously reviewed here), due to the tricky texture and color of the white half. It's a shame since Exotic Dance is so pretty in the pan. Despite reading reviews warning of the chalkiness of the white, I went and got it anyway, because the idea of white and gold was intriguing. The golden half did not disappoint--- it's really lovely, smooth, and I love the color. Which is saying a lot since I usually steer clear of golds. The white, as described by bloggers, was difficult. It feels chalky, hard to pick up on my brush, and kind of a pain to blend. I failed many attempts to blend it together with the gold for a cool eye look. However, it's been growing on me (more details below), and I've been cured of my buyer's remorse. The way to make this duo work for me is to simply not use them together, and to use them as singles. As singles, they're awesome and really shine. I use them on the lid and use a plain black/brown liner color like NARS coconut grove to add a little depth. After all, there's only room for one queen bee. True of cliques, and for eyeshadows.

Let's take a look at some photos.

Here's a closeup of Exotic Dance. In the pan, the white has a sheen, as does the gold half. As you can tell from the dents, the gold half kicks up product a lot easier than the white half. There's also large particles around my pans that I haven't cleaned up; that dusty look is inevitable when you're dealing with the white.
And here are swatches of the two colors. In the pan, the white looks like a polar white and the gold looks like an old gold. However, when swatches, the colors are a bit different. This is likely due to the part sheerness of some NARS shadows, which allows for incorporation of your skin tone into the final color. I really like slight sheerness and don't associate it with cheapness. A good semi-sheer eyeshadow blends compliments skin tone better. So, when looking at my swatches (and others') keep in mind it'll look different on everyone. My skin has neutral yellow-olive undertones, for reference.


The gold is a relatively neutral gold, perhaps a slight rose gold even. There are no strong yellow, bronze, brown, or orange undertones, which is great. The reason I don't like most golds is because of too strong of a presence of those other tones. I really love the gold in NARS Exotic Dance; I find myself reaching for it often despite my gold-phobia.

The white is a sheer and has a small amount of iridescent quality.  As you can see, it swatched well with my brush and looks even despite the weird texture when picking it up. On the eye it's actually very pretty. I used it as my lid shade and used coconut grove for lining and slight smoke. I got the idea from Bobbi Brown, who usually uses a matte white-toned shade all over, as well as the new NARS book which I noticed used the sheer white in Pandora to brighten smoky eyes quite often. The sheerness is great because I can use it all over and it doesn't scream white! In fact, you can't really see much, however it results in a really bright-eyed look, due to the lightening power of the white and the light shine. It made my eyes look wider! This is the surprising redeeming quality that made me a fan of the Exotic Dance duo.


The next order of business was to find potential dupes. My stash is limited, however gold is a pretty ubiquitous color so I had a couple colors in mind that looked similar in the pan. I pulled out my Bobbi Brown Warm Eyeshadow palette, my Urban Decay Naked Palette, and a few single shadows. One of the whites, Sephora Aspen Summit single eyeshadow was Sephora's birthday gift last year, so many of you probably have it. 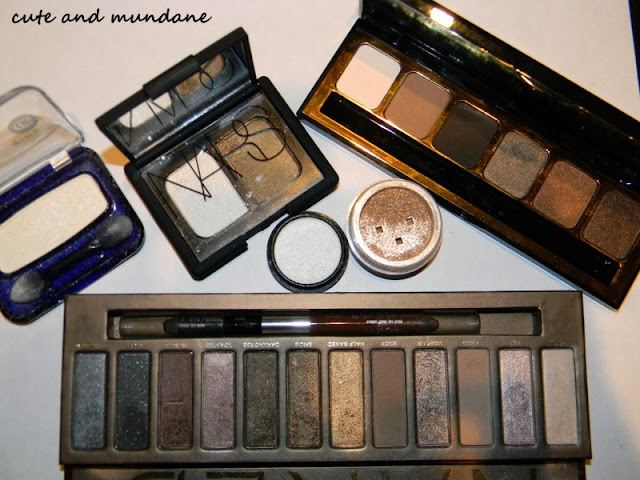 The results of the swatch comparisons was quite elucidating. Although the colors looked relatively similar in pan, they looked drastically different when swatched!

The whites looked especially similar in pan, after all shimmery white is shimmery white. However, whites can be quite different! NARS Exotic Dance is much less pigmented and shiny than Sephora Aspen Summit. It's also sheerer than my CoverGirl shadow (animal testers, hence not promoted here), which has the more milky white aspect that is more common in white mattes. This reinforces the idea I wrote above that this was meant to be a sheer shine type of shadow. If you're looking for it to be white white, that's not going to happen.

The golds were all over the place! NARS Exotic Dance is my favorite of the bunch, as it has the neutral rose gold tone as I mentioned above. Urban Decay Half-Baked is way to yellow-orange and warm for me. Bobbi Brown Burnt Sugar is a really nice darker old gold, but more appropriate for fall, which is when it was released. Bare escentuals Gold Medal is a cooler gold.

In conclusion, NARS Exotic Dance is a surprising winner for me this summer. Once I figured out the white, and found peace in using the colors separately, I really embraced this palette. I wouldn't say this is a must have by any stretch of imagination, although it is unique and I really do like the gold a lot. $33 is a lot if you're going to use just one shadow! (At that rate,  you could get a Chanel.) If you're looking for something a little different, this might be for you. If you're stash is small, you might have bigger better holes to fill with your pocket money.


Thanks for reading, and I hope you enjoyed this post! Let me know if you've tried this, and feel the same or differently, or have other tips! I have a future post planned showing what products I've been using alongside Exotic Dance. However, I have a presentation coming this week, so I won't get to it for at least a few days at least. Hope you guys are enjoying Memorial Day Weekend wherever you are, especially those with friends and family who have served!