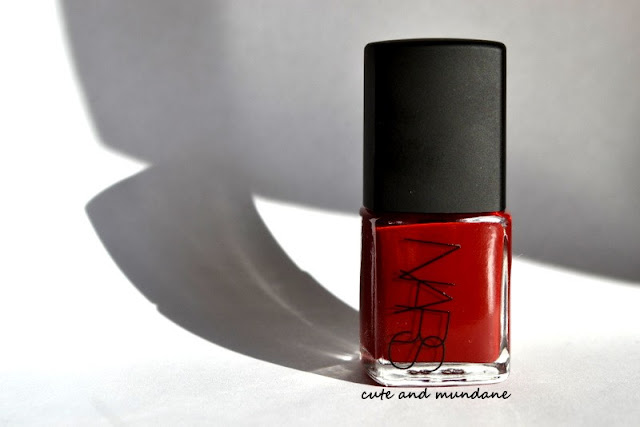 'Tis the season to wear red and NARS Jungle Red nail polish is perfect for occasion. (Actually, it's perfect for any occasion, really). I've found myself particularly attracted to NARS Jungle Red because it's holiday season. However, it's also a really great workhorse type of red that can be worn year round. I hope you enjoy my photos and review! 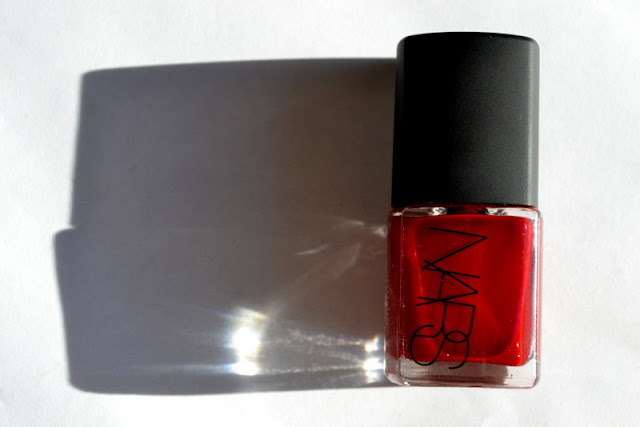 Jungle red comes in the typical NARS squared polish shape. For those who are not familiar with NARS nail polishes, the whole square rubberized cap is attached to the applicator, unlike Chanel and Dior where the cap is just for show and comes off to reveal a nubbin sized applicator underneath. Application can be tricky with such a large handle, but I find it to be a big problem. In fact, I might prefer it to the tiny applicator handles. 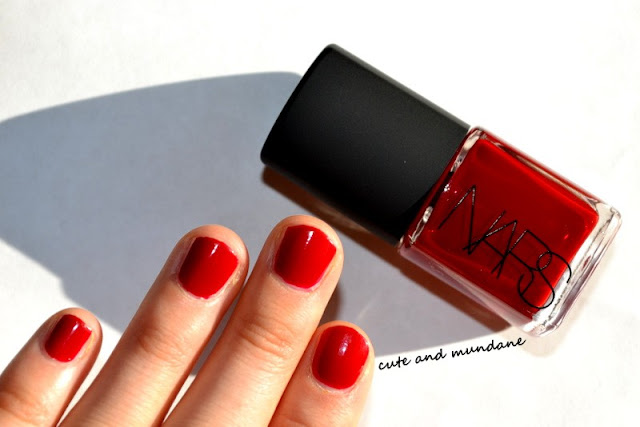 NARS Jungle Red has a creme finish. I like to wear it with topcoat to keep it shiny. I find that it is more prone to scuffing and less shiny than the more recently released colors NARS Matto Grosso and NARS Vestale. I suspect there may have been a recent improvement in the NARS formula. In terms of opacity, one coat is almost opaque however I like to use two for good measure. The formula is pretty standard for a red creme and I have no complaints.

I would describe NARS Jungle Red nail polish as a very standard red. It's not too dark, light, or candy colored. It had fairly neutral undertones which do not lean orange or blue. The other red polishes I've swatched help illustrate this. I've photographed my nails in sunlight (above) and indoors (below). I think the indoors swatches are better suited for discerning undertone. In shadowed situations, Jungle Red can appear to be a bit darker.  Essie Really Red is considerably brighter and more primary colored. It's similar to stop sign red. Revlon Vixen is darker and more burgundy. Essie Bordeaux seems similar in sunlight, however indoors you can appreciate that it has more berry and wine tones. When compared to these three nail polishes, NARS Jungle Red appears to be a very standard red. Because of this, it can easily be worn across seasons and situations.

Thanks for reading! I hope you enjoyed today's post. What are your favorite holiday reds or year round reds?