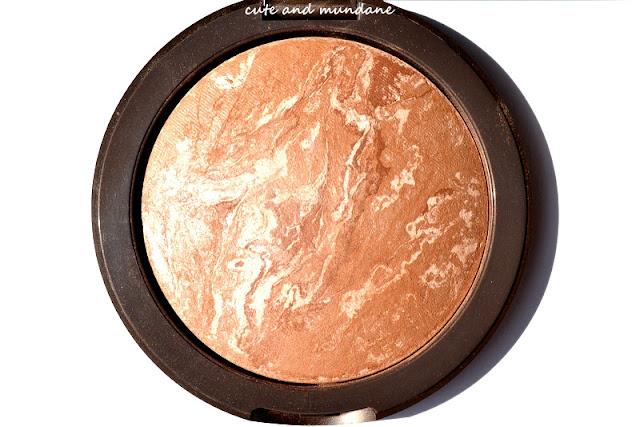 This is big. Literally. Laura Geller Baked Body Frosting in Tahitian Glow is the  largest piece of makeup own. Tahitian glow is used to give a glowy look for both face and body. (Due to the behemoth amount of product, I'm guessing the folks at Laura Geller were taking the use for body seriously). However, what exactly is a baked body frosting? Is it a bronzer? Highlighter? Both? Read on to see what I made of Laura Geller's Baked Body Frosting in Tahitian Glow. First, I'll cover the stats. Laura Geller Baked Body Frosting weighs in at 0.85 oz. (compare with 0.28 oz. for NARS Laguna bronzer). It's good for liberal use on the body. Not only is there a lot of product, it's encased in plastic packaging that makes it look even larger. You can see above that the lid is at least an inch thick. The product doesn't dome much above the pan, but the cap is huge. The extra room is to hold the puff that is meant to apply the product on your body. There's also a disposable quality plastic tray that holds the puff. To be honest, it's a bit impractical. I'd rather have a puff-less product with a smaller lid, or a built-in-shelf for the puff to give it a more luxe feel. I received Tahitian Glow as a part of Laura Geller's Glow and Behold Set (QVC exclusive), however it is sold individually for $45. While the quality of the product inside is nice, it could use sleeker packaging. 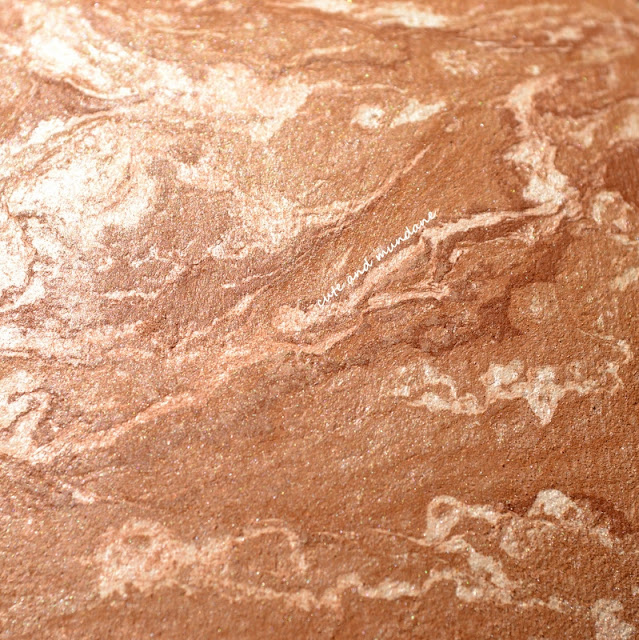 The swirling tan, cream, and pearly pink are beautiful in the pan. They remind me of MAC's mineralize products. I think these swirls are a fun aspect to the product; each individual product will look a little bit different. Laura Geller's Baked Body Frosting formula can be used both wet and dry. It's well pigmented and has a smooth but slightly thick and powdery texture which seems to be characteristic of baked products. The ingredient list isn't too long and it doesn't contain mineral oil or parabens.

Now I'll get back to the question of what exactly a baked body frosting is. Laura Geller refers to it as a 'glow'. A number of online reviews refer to this as a bronzer. I would say it's more like a bronzer and higlighter hybrid: an illuminator if you will. It has more frosted shine and slightly less pigment than your typical bronzer. In this sense, it is made with body in mind. For body use, you don't want too much color; faking a tan with a powder product isn't practical and might end up looking a bit dirty. A slightly bronzed shine will go further to contour the body with strategic glow. You can see from my swatches below that Laura Geller Tahitian glow is frostier than my other bronzers. It falls somewhere in between the golden brown of NARS Laguna bronzer and the peachy tan of Dior Aurora bronzer (reviewed here). When swatched, Tahitian glow is a natural light tan glow on my light-medium skin. When worn, I can't see much tan color unless I start to layer it on. I prefer to use a fluffy brush and not the puff to achieve a more natural effect. 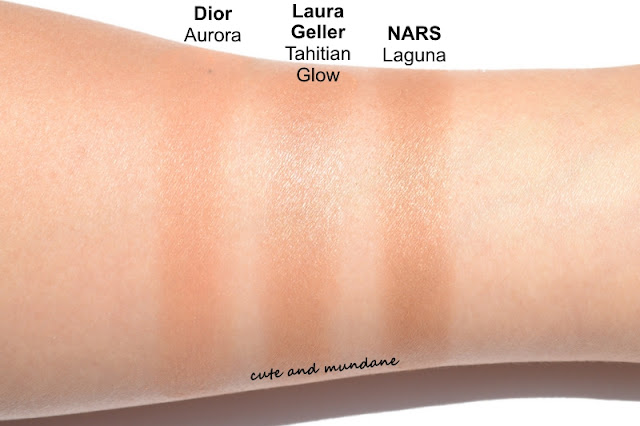 Overall, Laura Geller Baked Body Frosting in Tahitian Glow is a fun addition to my summer makeup collection. The swirled product looks beautiful in the pan, though the packaging is a bit bulky. It's a less messy alternative to liquid illuminators for the body, and if used lightly can provide a strategic J.Lo glow to the body. Due to Tahitian glow's frosted nature, I'd be hesitant to layer this on heavily for an actual color change of your skin. The color looks nice on the face as well, though I would purpose this more towards illuminating purposes as opposed to bronzing or contouring. Thanks for reading! Have you tried Laura Geller's baked body frosting? Do you have products in your collection designated for body use?

Disclosure: This post contains product(s) sent to Cute and Mundane for consideration by PR. The ideas and opinions in this post are genuine and my own.
Posted by Dovey at Monday, June 18, 2012