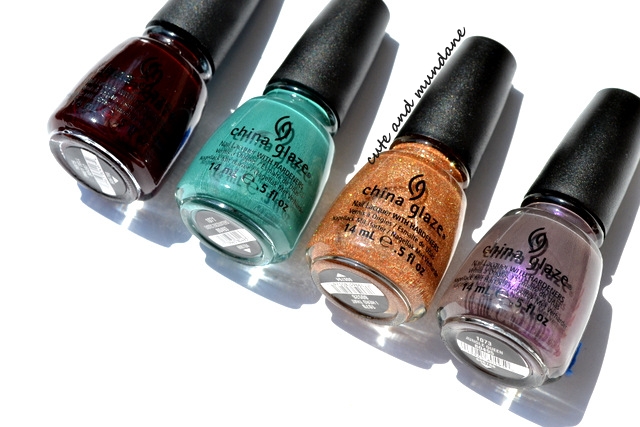 This Fall 2012, China Glaze takes us on safari. The China Glaze Safari collection has the typical safari khakhis alongside dark shades which give the collection a foreboding edge. The display and colors portray a feeling of dying light giving way to an uneasy dusk. It seems as if they embraced the wild side of the African wilderness. Today I have a sampling of colors from that collection, including Prey Tell, Jungle Queen, Exotic Encounters, and I Herd That.
China Glaze I Herd That is a well packed orange-y copper and gold glitter polish. In my imagination, it channels the last brilliant rays of sun stroking fur before finally sinking into the horizon. China Glaze does glitter quite well, and this is no exception. With two coats, I get good coverage with the glitter alone. I'm surprised that I like this. I find golds and coppers too harsh alone, however together they balance each other out nicely. China Glaze Jungle Queen is a smoky purple with sheen. It really resembles the purple of clouds as dusk rolls in after sunset. It has a striking resemblance to Chanel Paradoxal. I can see this being a popular pick from the Safari collection! 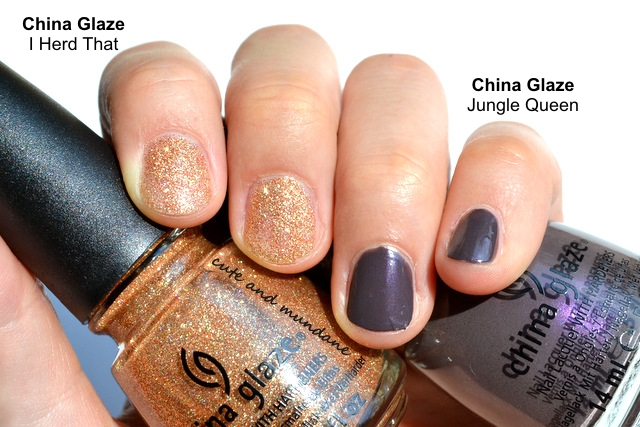 China Glaze Exotic Encounters is a teal-leaning green creme. It's more lush and blue than I imagine typical grassland foliage to be. Perhaps its the green of grass at a watering hole as dark clouds move in to obscure the sun's rays. You can see from the swatches below that it is significantly darker than Sephora by OPI's Ocean Love Potion. Compared to the true forest green of Essie Going Incognito, you can see that China Glaze Exotic encounters has more blue. 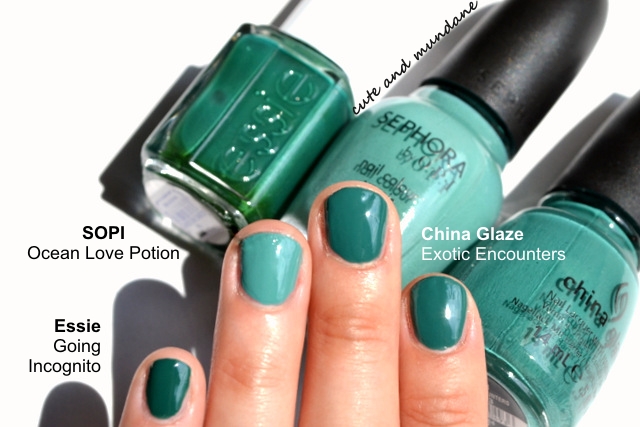 China Glaze Prey Tell is the color I most anticipated. It's a dark venous red that gives me chills when imaging the connotations. This is the darkest red I own. You can see that it's significantly darker than NARS Chinatown and Sephora by OPI Rock His World. 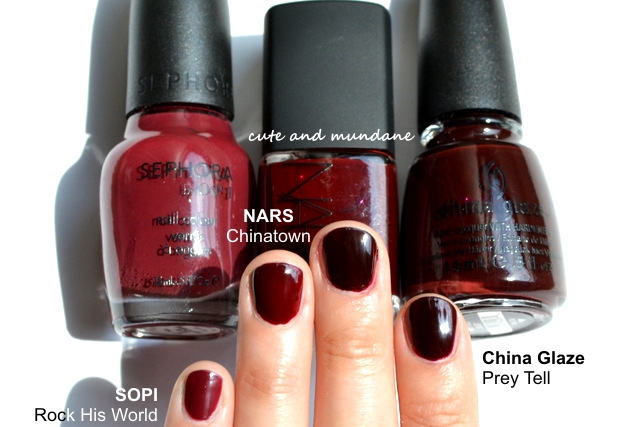 China Glaze Safari certainly has lit my imagination with its color imagery. Safari typically is a summer theme, however the ominous color interpretations here make it well suited for fall. It seems like a great collection to transition between the two seasons. Have you picked up anything from China Glaze Safari? What kind of colors are you wearing now?

Disclosure: This post contains product(s) sent to Cute and Mundane for consideration by PR. The ideas and opinions in this post are genuine and my own.
Posted by Dovey at Wednesday, July 04, 2012