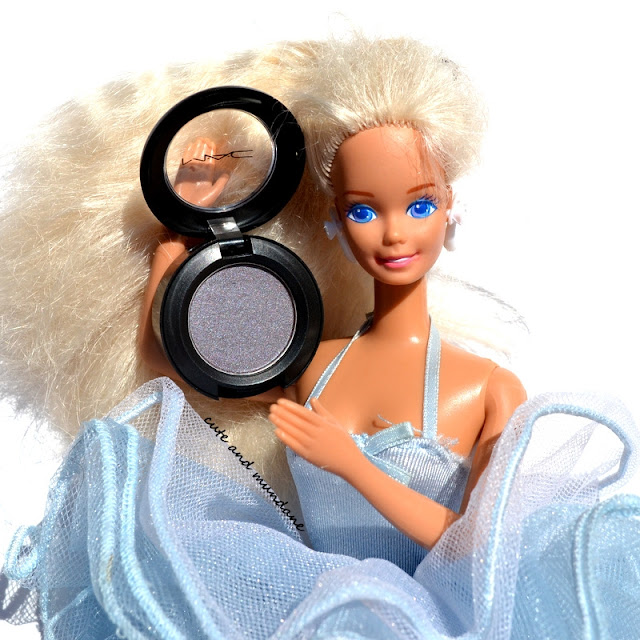 MAC Moth Brown is legendary limited edition eyeshadow. It's one of those taupes that a beauty aficionado is supposed to have. I can't tell you how long it's been on my 'want-but-can't-have' list. This coveted eyeshadow has quite a history. It was first released in the  MAC Madame B. collection in 2005, then re-released in Barbie Loves MAC in 2007. (I would have gone nuts over a MAC Barbie collection, given the chance). Recently, fans voted for MAC Moth Brown to be brought back a third time in the MAC By Request collection in August 2012. I couldn't believe my luck! 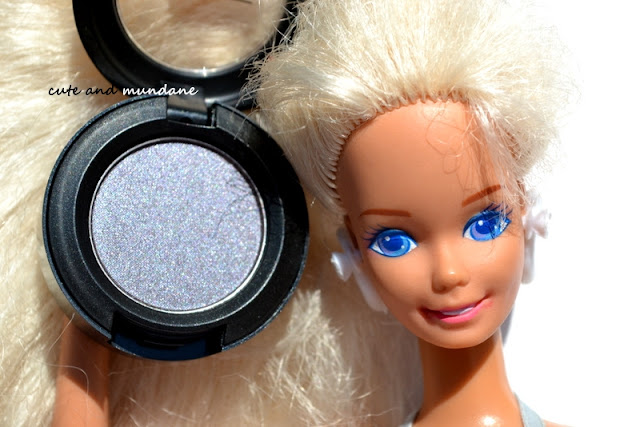 To celebrate the return of MAC Moth Brown, I asked my mom to dig up some of my childhood Barbie dolls for this post. (You might remember seeing one in a previous post). Apparently, I was more of a Barbie girl than I remember. There were at least ten of them clothed in various princess or 80's/90's gear. With her blue eyes, painted brows, and voluminous cornsilk hair, Barbie was on of my first impressions of beauty. Sometimes I wonder if my perception of beauty would have been different had I grown up with the more ethnically diverse dolls that are available today. Despite an overall disconnect in appearance, Barbie and I do share two things in common: impossibly frizzy hair that's a pain in the butt to comb and an appreciation for makeup. MAC Moth Brown definitely looks like a purple that Barbie would wear. (As you can see above, it matches her blurple irises quite nicely). Despite having quite a different complexion, MAC Moth Brown is a color that I can wear too. The universally flattering nature of MAC Moth Brown is what makes it so special. 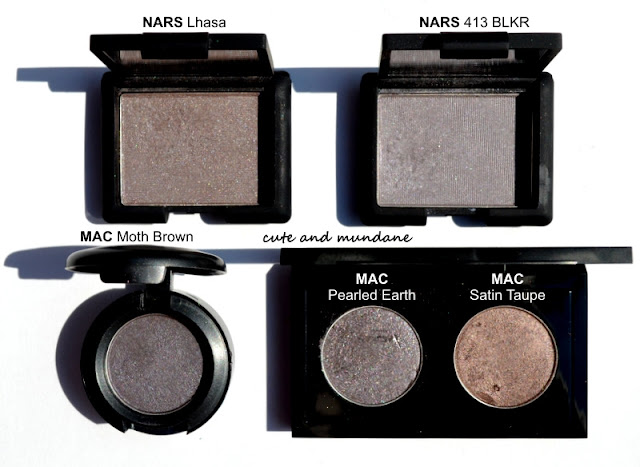 I've pulled out some of my taupe eyeshadows to compare to MAC Moth Brown. MAC Moth Brown looks positively purple in the pan and looks quite purple in swatches as well. I find that it looks more purple in low light, while it looks more taupe in sunlight. You can appreciate how purple Moth Brown is when you compare it to MAC Satin Taupe (another crowd favorite). MAC Satin Taupe is more of a brown-taupe, while Moth Brown is a dark cool purple with hints of taupe. MAC Pearled Earth from the 2012 Reel Sexy collection is very similar in the pan and in the swatch. Pearled Earthis has a slightly more silvery lavender sheen, while Moth Brown is more brown. NARS Lhasa (reviewed here) has some purple in it, but is a lighter earthier taupe than Moth Brown. NARS 413 BLKR is a much lighter cool lavender. It's worth noting that MAC Moth Brown has a 'frost' finish, so it has a sheen, and a texture that isn't as smooth as MAC's 'veluxe pearl' eyeshadows. 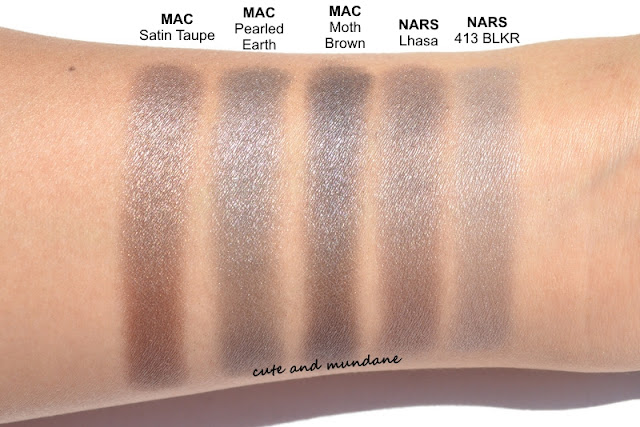 MAC Moth Brown is more purple than I had been expecting, but I'm happy to have it in my collection for both sentimental and functional reasons. Those who waited too long know that Moth Brown has since sold out for the third, and possibly final time. But wait, there's more! (There's only one more as a matter of fact). I picked up an extra pan of Moth Brown for a thank-you giveaway to Cute and Mundane readers. I'm really excited about this and will be putting together the giveaway soon!

Thanks for reading! Did you pick up MAC Moth Brown or any of the other MAC By Request colors? What is your favorite taupe? Were you a Barbie girl too?