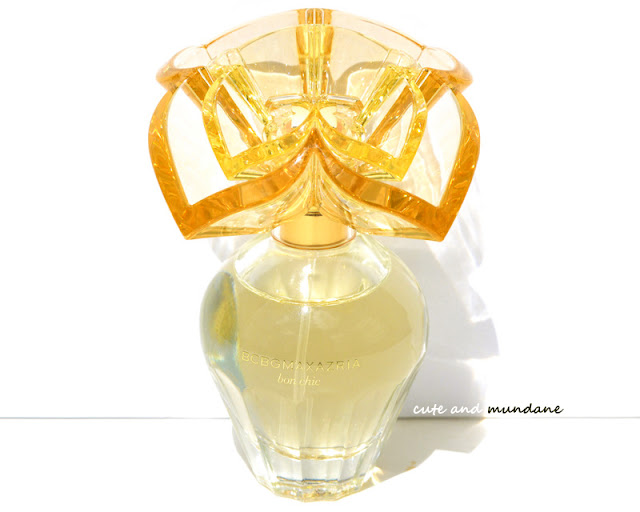 April has been a very fragrant month for me. Like the unfurling petals brought about by the months' showers, my interest in fresh fragrances has burgeoned as well. A number of new bottles have graced my dresser, waiting to be shared on Cute and Mundane! Most recently though, I've been enjoying a sample of BCBG Max Azria Bon Chic Eau de Parfum!

Bon Chic means 'good style' in French, and draws reference from the brand's name. If you know your fashion trivia, BCBG is actually an acronym of the French saying Bon Chic, Bon Genre (Good Style, Good Attitude)! BCBG Max Azria Bon Chic is the second fragrance from BCBG Max Azria. It's festooned with the same blossoming petaled stopper as its predecessor; but the bottle and fluid are golden yellow, as opposed to the original pink.

BCBG Max Azria Bon Chic is a smooth, sweet fruity floral scent. It opens with juicy sweet mango.The Asian pear follows next; it has a touch of creaminess that you'd expect from a pear, but also a crisp watery aspect as well. The pear is joined by the raspberry; the two marry well and linger throughout most of the fragrance, along with a light vanilla. While I wouldn't say the florals star in the scent, they do have a significant presence. Petals of peony open up the fragrance and make it more feminine. Orange blossom is present in smaller doses; violet even less so. The base is relatively light as well; a clean dry wood is most evident, while the bottom is rounded out by a light musk. 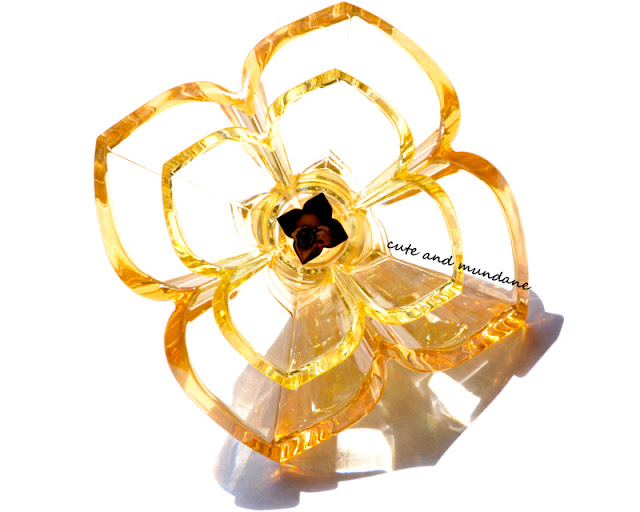 BCBG Max Azria Bon Chic ($55 for 1.7oz) recalls the delicious ripe fruits of summer, bolstered by feminine floral blooms. There is considerable sweetness from the mango, pear, and raspberry, while peony adds an enveloping floral presence. Light vanilla, wood, and musk make for a pleasant base. Overall, it's a nice scent for those who enjoy optimistic fruity floral fragrances. BCBG Max Azria Bon Chic can be purchased from Ulta, Macy's, and other fine department stores for Mother's Day and beyond.

Thanks for reading! Have you tried BCBG Max Azria Bon Chic? What fruity floral fragrances are you enjoying lately?

Love, Dovey
Disclosure: This post contains product(s) sent to Cute and Mundane for consideration. The ideas and opinions in this post are genuine and my own.
Posted by Dovey at Thursday, April 25, 2013