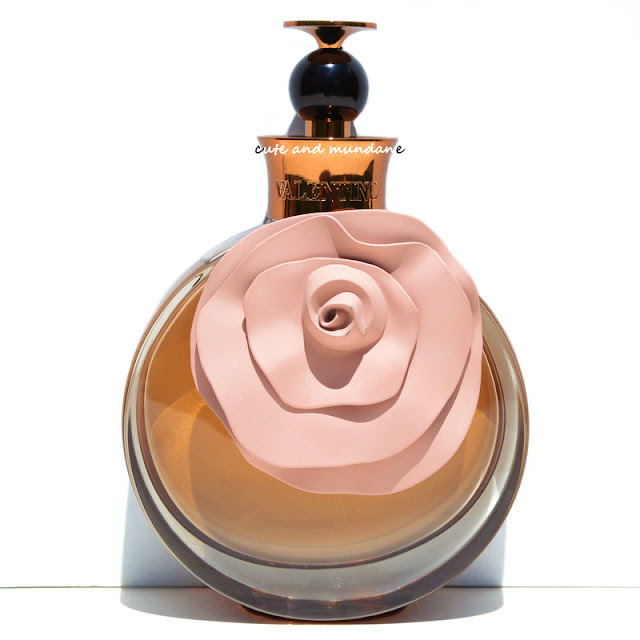 The bottle for Valentina Assoluto is simply stunning, don't you think? It's festooned with a beautiful pink flower that immediately recalls the unique style of Maison Valentino. Roses were a longtime signature of Valentino Garavani, and were featured in his most striking images. One such vintage photograph features a model standing before the Great Sphinx in Egypt, wearing a pale green cocktail dress bordered with roses. Another more recent addition depicted the principal ballerina of the Staatshoper ballet draped in a layered tulle gown blossoming with rosettes during a New Year's performance, more than fifty years later. According to the Valentino Garavani museum,


"For Mr. Valentino, the rose was not only a symbol of artistry and couture, but a token of timelessness, cultivation, and the endurance of beauty,"

Valentina Assoluto Eau de Parfum (2012) is an alluring white floral blend brimming with peach, vanilla, and truffle. The perfume opens with a splash of bergamot which, as in its predecessor, tends to trail into the body of the fragrance. The bergamot seems to be laced with the slightest pinch of patchouli. The perfume quickly slides into a refined peach. This peach is not of the sort where one taste will send sweet juice running down your hand; instead it has the crispness of a firm, slightly under-ripe white peach. The fruit begins to mellow as a vanilla undercurrent enters my consciousness.The vanilla is actually quite soft and unlike that found in typical vanilla gourmands, a softness I find quite preferable. The fantastic earthy mushroom flavor of the truffle (which I discuss at length here) is closely intertwined with the vanilla, adding a fullness sans heaviness. A smooth, pale jasmine adds a soft white floral focus to the scent; it lacks any indolic heaviness. At the base is a touch of oakmoss, adding an almost licorice-like spin when combined with the 'foodie' vanilla and truffle. A blend of peach, jasmine, vanilla, truffle, and oakmoss wears close to the skin and persists throughout the remaining life of the scent.

The allure of Valentina Assoluto lies in its tempered beauty.The perfume contains notes that, when left unchecked can be overwhelming, and takes them down a notch. The peach is not too sweet, the jasmine is less opaque, and the vanilla is soft. Instead of using greater intensity or heavier base notes to add dimension, the truffle and oakmoss add a fullness and intrigue to the existing scents. The result is a masterful blend that is transparent and refined, yet intriguing. On the same train of thought - Valentina Assoluto is more nocturnal and sensual than its sister Valentino Valentina, however it is by dint of the ingredients, as opposed to the sheer weight of the fragrance. (In fact, I find Valentina Assoluto to be the 'lighter' of the two scents.) 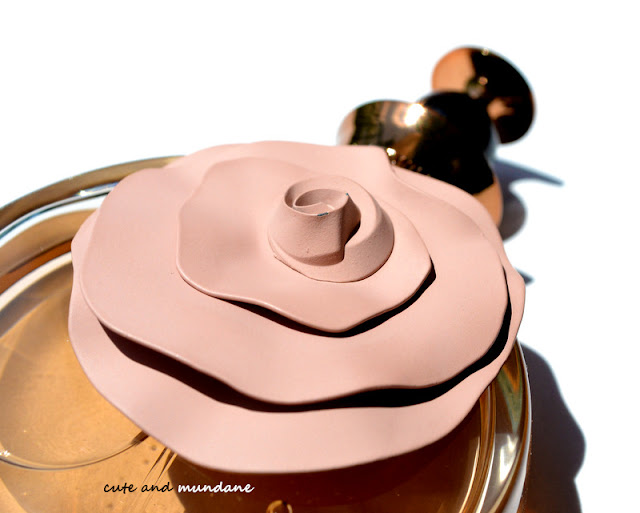 Valentina Assoluto Eau de Parfum ($88 for 1.7oz.) is a beautiful blend of white peach with white florals that wears close to the skin. Like its predecessor, Valentino Valentina, these notes are accompanied by a tempting trifecta of bergamot, vanilla, and truffle. In fact, the two Valentino perfumes are quite similar in construction, so if you love one, you'll likely enjoy the other as well.

Much like the classic Valentino rose with which it is adorned, Valentino Assoluto embodies the spirit of artfully executed couture. As a white floral lover, I'm delighted to have it in my fragrance wardrobe! Valentina Assoluto is available at fine department stores nationwide. Thanks for reading! Have you tried Valentina or Valentina Assoluto? What perfumes are you loving at the moment?

Love, Dovey.
Disclosure: This post contains product(s) sent to Cute and Mundane for consideration. The ideas and opinions in this post are genuine and my own.
Posted by Dovey at Tuesday, May 21, 2013