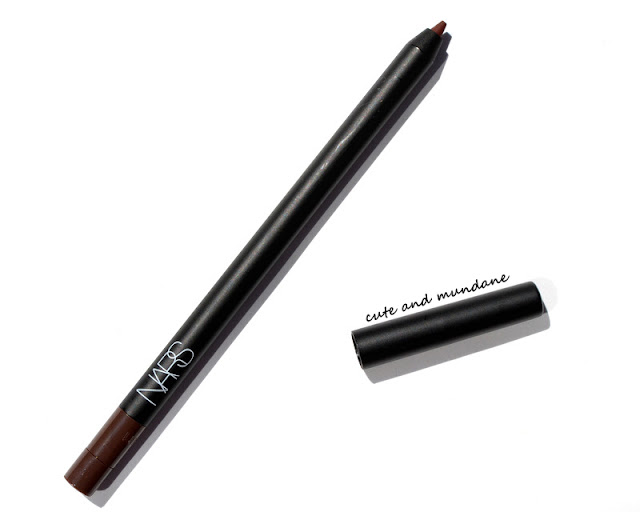 I have lids that crease near the lash-line so it's tough for me to find pencil liners that can last through the day, even with primer or powder. I've found that the NARS Larger Than Life eyeliner formula has better pigmentation and staying power on my lids than Urban Decay or MAKE UP FOR EVER pencils, though all three make quality products. However, it is worth noting that the NARS formula is a bit dryer and drags more than others, especially as it gets older.

NARS Larger Than Life Eyeliner in Via de Martelli is a cognac brown. It has red tones mixed in, which add intrigue, especially when compared with other brown shades. However, the red tones can be risky if your eyes are prone to a red-rimmed effect. The shade works well for me, as my eyes are brown and my skin has some pink tones, qualities which won't overemphasize the red.

Because browns eyeliners can truly run a gamut of shades, I've swatched a few colors from my collection below so that you can get a better idea of what NARS Via de Martelli eyeliner looks like. Most of you are probably curious about how NARS Via de Martelli looks compared to NARS Via Appia, the shimmery brown liner from the original NARS Larger Than Life collection. You can see it's a similar intensity, however the former is a matte red-brown, while the latter is a more glowy copper brown. You can see that Urban Decay Demolition, which is a standard dark brown liner, is significantly darker and cooler. MAKE UP FOR EVER Aqua Eyes in #2L is the most similar in color, however it's a little more golden. Urban Decay 24/7 Liner in Smog is lighter and more golden.

Overall, I've been loving NARS Larger Than Life Eyeliner in Via de Martelli.  The slight red tones in the color make it an edgy and unique brown in my collection. However, as I mentioned above, it might not work for everyone. If you're trying to choose between NARS Via de Martelli and Via Appia, I would probably recommend the latter, as it is more universally wearable (and gorgeous too). However, I'm happy to have both in my hands!

Thanks for reading! Have you tried any NARS Larger Than Life Eyeliners? What did you pick up from the NARS Fall 2013 collection? What NARS products are you loving lately?

P.S. Be sure to check out my review of the NARS Larger Than Life Eyeliners in Via Veneto and Madison Ave.!
Posted by Dovey at Friday, August 16, 2013