This morning I decided to go to work a bit late and instead do some computer work (and dilly-dallying) at home instead. Sooooo I had the time to paint my nails. I was drawn to Sephora by OPI's Ocean Love Potion, which is one of the oldest SOPIs in my stash. The blue-green creme is such a calming color- it's the perfect color-therapy for stressful times at work. I also notice, the more stressed I am, the more likely I am to paint my nails! 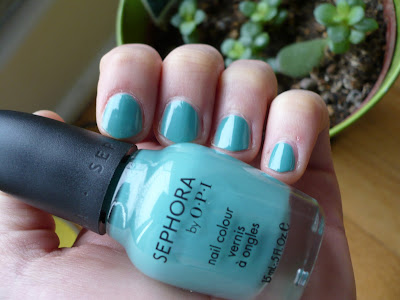 In terms of application, it was flawless. SOPI's have great formula in general, but Ocean Love Potion is on the better end of great! I fell in love with SOPI all over again. I'm a little conflicted since OPI was bought out by Coty, a known animal cruelty company. Supposedly PETA still supports OPI since it has pledged to remain cruelty free, however you can't help but think that some of your money is ending up in the wrong hands. I'm not sure what sort of cut OPI gets from Sephora by OPIs, making this even more murky. I  think I may tentatively continue to purchase select SOPI colors I really love, but not as often as I did before.

On a more positive note, surprise! Baby Bird is making an appearance in this entry =). For those of you who don't know Baby Bird, she's my mischievous secondhand poodle. I found her in a shelter almost three years ago. She doesn't really like the smell of polish (who does?) and ran away shortly after this pic. 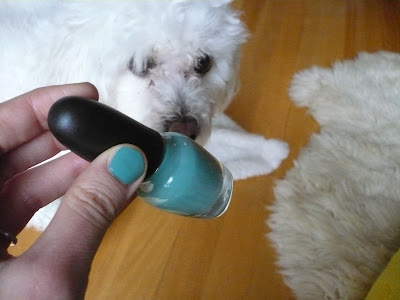 Finally, here's a picture of my jade plant, or rather what's left of my jade plant. I've had it for about  a year now--- I think it was from Trader Joes. If you've seen Jade plants usually they're big and branchy and tree-like. My plant used to be this way, until I took bad care of it and it all but died. Maybe I watered it too much? However a few branchlings took root (as succulents often do) and there are a few little plants growing. You can see one BIG leaf, which was the leaf size of my original plant. The little guys are growing reaaaally slowly. This plant is a lot more finicky than my other succulents for sure. I'd like for it to grow faster--- so if anyone with a green thumb has ideas, I'd love to hear! 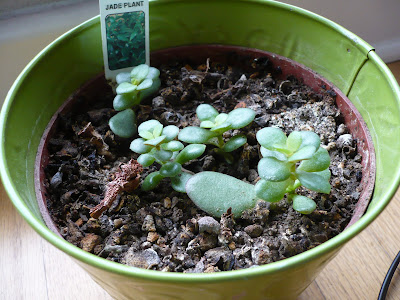 Last time I wrote about feeling like spring... however it's supposed to snow again soon according to the forecast. Sigh. My new sunhat and a yellow bikini lemmings went down the drain. Well, a girl can dream....