Late February I bought CHANEL Vitalumiere Aqua from a Nordstrom in the burbs to replace a different foundation that just wasn't working for me. I wanted something light that wouldn't mess up my skin, so I don't have to be dependent on foundation all the time to look good. At the time, I'd given up on foundation, thinking that I just must be reactive to foundation in general. However,  after reading Beauty Look Book's foundation series, I realized that other people have the same problems, and there are foundations out there that might better for sensitive people. So, after seeing a rave review about Vitalumiere aqua, I took the jump. 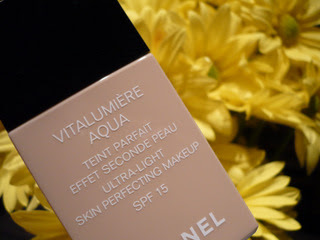 I bought the color B10, Beige Pastel, which is the lightest of their yellow-toned colors. I'm really not the palest person you'd meet, however this matched the color of my neck although my face is half a shade darker. I'm a little worried as to what will happen in summer when I tan a little! The initial finish is a little matte, which is fine by me because I don't like too dewy, which can appear oily later. I have combo with an oily T-zone later in the day, however this foundation looked better as the day wore on! I'd heard that before, but now I actually believe it! I don't know if I can ever go back to other brands now. Color oxidation was also very minimal, if any. I was also amazed because my previous experiences in other foundations resulted in me feeling too yellow/orange at the end of the day. Coverage was light/medium with the amount I used. My skin looked flawless, except for the scars, which still showed through. I didn't use any powder (a first) and the foundation seemed to last the entire day. Oh, and it feels weightless. So essentially, awesome, love,  love.

I'll report later about break-out issues. So far, not much problem. I think if I leave it on from morning to night, it might cause my skin to be unhappy, but no major issues thus far. If I find I have more problems, I'll update. 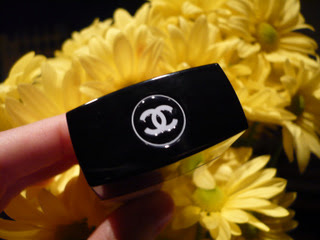 The bottle is plastic, which seems less luxe, but it doesn't really bother me. It's really pretty though I wish you could see the actual color inside! All the bottles are opaque with the same color on the outside. I guess practically, it's good for the foundation, because there's no light exposure. The bottle is a squeeze bottle, like you see in the photo below. I think squeeze is mostly a good idea, however sometimes it makes me nervous. I think the foundation can get a lumpy quality in the bottle (which is ok, just shake), so it doesn't always flow easily out--- you have to squeeze. And that makes me nervous because I'm afraid with too much pressure a lot of foundation will explode out!! I think the squeeze is hygienic, but not perfect. 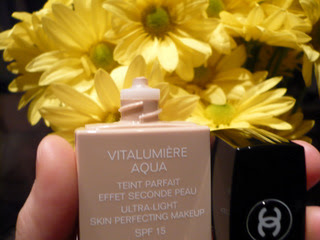 I only use two or three small drops to cover my entire face. A little really goes a long way. Chanel recommends application with fingers, and I really think that's for real. A brush would be horrible--- you'd get way too much product. In fact, I read a comment somewhere complaining about the foundation because it was too heavy (well--because they used a brush to apply!!) 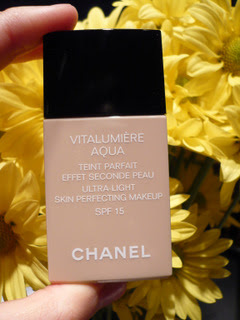 OK, so this is definitely a two thumbs up. Pros would be weightless feeling, lack of break-outs, and looking better as the day wears on. Cons would be color selection and difficulty dispensing.

On a final note, how do you guys feel about makeup counter sales associates? I feel like it is such a mixed bag. When I bought Vitalumiere Aqua, I went to a Nordstrom that wasn't my usual downtown location. I was at a Nordstrom in the really rich burbs. I've only been there twice, but each time, I felt like the SA's were a bit snooty. Granted, the store is busy on Saturdays, but it took for. ever. for a Chanel SA to even ask if I wanted to be helped when I clearly did. I had the same problem with Bobbi Brown last time I came. The SA did do her job and swatched colors well, however the feeling I got was lukewarm. It seemed really clique-y, with them focusing on their usual clientele. (On a side note, MAC SA's were nice.) Next time, I'm sticking to downtown. I guess I'm just surprised that city SA's are nicer than the ones in the burbs!

OK, well lesson learned! On a more positive note, I'm loving yellow right now. I recently bought China Glaze's Happy-Go-Lucky, which I'd been wanting since last year. And the yellow flowers in my photos were a surprise from my fiance the other morning. Life is always happy with a lot of yellow!

On that note, hope things are happy in your neck of the woods, and thanks for reading!