Here's an array of products I've been reaching for the past couple of days. The theme is soft, glowy, nude tones, with precisely defined eyes and brows. Hence, beachy keen! (Does that make sense to anyone besides me? I thought it sounded cute.) 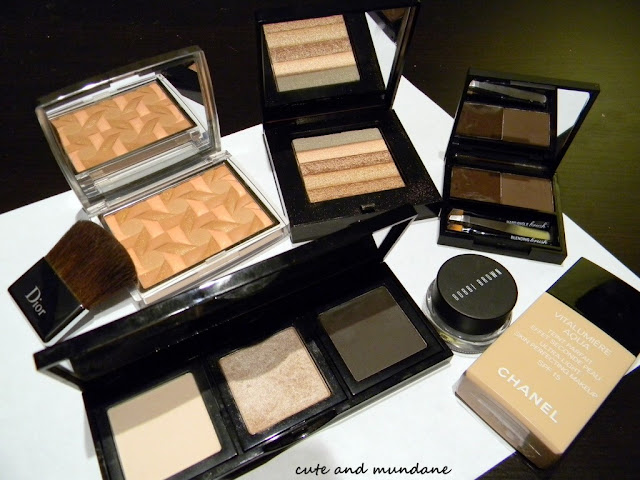 I'm still using my Chanel Vitalumiere Aqua in Beige Pastel every day. It still wears well despite the warmer weather. I don't think I'll have to buy a darker shade for a while at least, especially when combined with bronzer. On top, I layer different amounts of Dior Nude Glow Healthy Glow Summer Powder in Aurora for a slight tan allover and heavier as a blush / bronzer / contour on cheeks. I add a slight dusting of Bobbi Brown Shimmer brick in Beige as a highlight. One thing I've learned not to do, is to add blush on top of Aurora. I tried a slight amount of NARS O for added color, and that was too much flush for my skin. Along with my naturally flushed lips, it was just too much! I'm not complaining though--- I prefer simplifying anyhow.

For eyes, I've been reaching for a nude "my eyes but better" look. After a layer of UDPP, I place a base layer of Bobbi Brown Navajo eyeshadow, a sheer pinkish off-white, all over, up to the brows. On the lids, I blend in Bobbi Brown Nude Beach eyeshadow, which is a nude shimmer. The shimmer is barely perceptible, and makes the lids slightly more luminous. I line my eyes with my new Bobbi Brown gel eyeliner in Expresso into a slightly winged shape and finish with a few layers of Bobbi Brown Extreme Party Mascara. I've been trying to incorporate more brown into my eyes, instead of my usual grays, since it fits a summery theme! Brows are defined with Benefit Brow-Zings.

I keep forgetting to include my lip products in photos. My favorite lately has been Bobbi Brown Rich Lip color in Bare Pink, which is a pale beige-pink. It smells like vanilla ice cream, which is a definite plus! 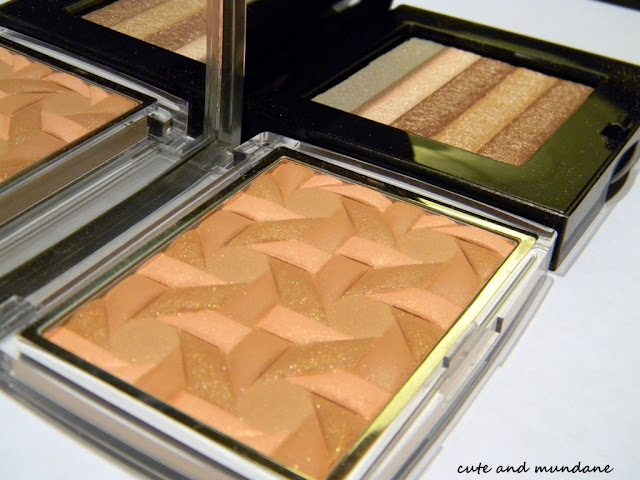 And, a final closeup of Dior Aurora and Bobbi Brown Beige shimmerbrick. Actual swatches are forthcoming, but I need to wait for actual daytime-sunlight on the weekends so I can take better photos!

Hope you're hanging in there this week. Thanks for reading!