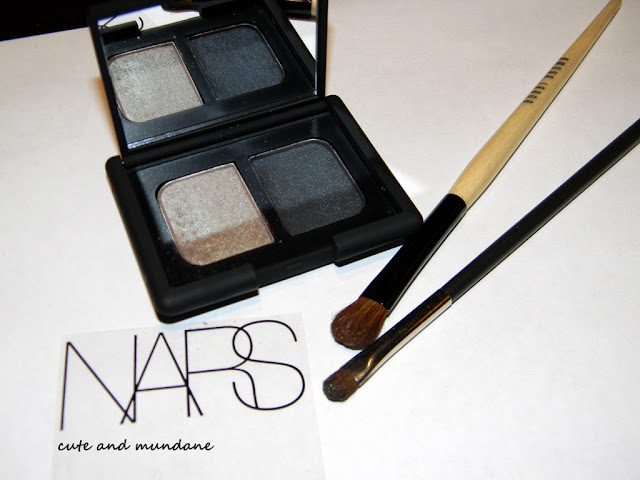 Hola chicas! I've had such a wonderful weekend so far. A good friend from afar flew here on business and I had the chance to hang out with her for a day. We baked bread, watched a chick flick, and did some touristy things. And... she's not a makeup person, but let me give her a makeover. It was the first time, I've actually done someone else's complete makeup, which was exciting! After some thought, I chose a old gold shadow made deeper with some chocolate brown, along with some light cheek contouring. It was an enhanced natural look, which looked really lovely, if I may say so myself.

So, what does this have to do with NARS Dogon? NARS Dogon duo eyeshadow is the palette I've been favoring heavily as of late. It makes for a nice cool smoky look, which is right up my alley. Hoewever, during the makeover, I passed over it immediately, because it would be way too dramatic for a non-makeup user with warm skin. And smoky doesn't seem to fit my friend's personality. Which really underlined the fact that both coloring and personality play a complex role in color choice. It's not a new idea, but still a cool idea. 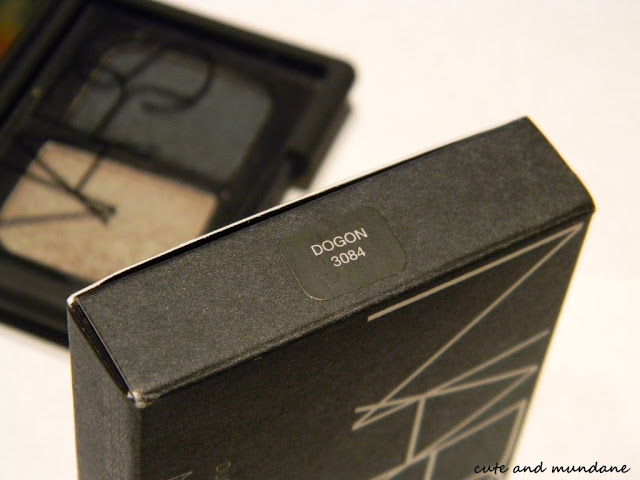 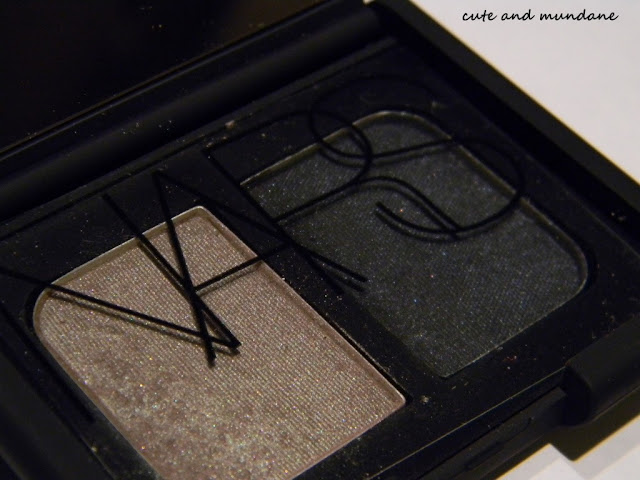 I've had NARS Dogon duo eyeshadow for at least a week now, so I thought it was time to share my review and a few photos as well.  As I mentioned above, it's a really cool toned eyeshadow duo, however it's really wearable on my warm skin tone. Dramatic, but wearable. This isn't the case with some cool shades, for example Urban Decay's Gunmetal which I find really difficult to wear unless blended or worn at night. I think this is a characteristic of some higher end cosmetics. In the pan, the colors may look the same, however on actual skin, higher end colors mesh better. I'm really pleased since I love cool tones despite my warm skin.

One of the really striking things about Dogon is how beautiful it looks in the pan. You've probably read this in other reviews, and it's true. As you can see there's a complex taupe-ish color that appears to have some hints of green and pink, as well as a darkened cobalt blue. I think my pictures capture the color quite well, however the flashes of cool green (and iridescent) shimmer are lost from the taupe side. The dark blue also has its own subtle blue flashes in light.
And yes, the nail color you're seeing in the shots is Dior Vernis in Aloha!
Here you can see my swatches of NARS Dogon. Both colors are well pigmented, but the color on my skin differs a little from what I saw in the pan. I'd have to say the colors are a teeny bit soft compared to what I'm used to with Bobbi Brown, but still not as easy to dig into as Urban decay.  The lighter taupe side of Dogon makes slightly sheer wash that goes on smoothly. I think the semi-sheerness helps the color meld well with my skin underneath. Hence, what you see in the swatch below is likely warmer than something you'd see on a cooler toned skin. On the eyes it's a very complex taupe with both mauve and green leanings--- if that sounds possible to anyone. The Darker navy looks more like charcoal on my skin, and the sparkles are mostly lost to the naked eye. When swatched it goes on a bit chalky, however I've had not problems when blending it with the taupe on my eyelid. It also looks a bit bluer on my lid. The colors look more special when blended together for a smoky look. The combination makes a smoky eye with subtle mermaid green flashes. The key is the subtlety. It's not in your face, but it looks special.


Finally, I've made some comparison swatches. I don't have an extensive eyeshadow collection, so I don't have any close dupes (good, since I don't want to buy the same color twice!) I've compared it to Bobbi Brown Burnt Sugar, Velvet Bronze, and Navy. One thing I noticed is the sheerness of NARS Dogon in comparison to the other shadows. Sheer in this situation is a good thing, as I've tried to describe above. It makes the cooler colors mix with my skin tone and more ideal for layering with one another to produce the cool green shimmer effect.


Overall, I really like this duo. It makes a cool smoky eye that can be taken up or down a notch depending on how much of the dark blue is blended in. However, I think it's a bit of a niche object, since it is inherently special and dramatic and won't necessarily fit with everyone's tastes. But, I think that's just how NARS rolls.

I hope you enjoyed this post! (I did try to put extra effort in, since the duo is so interesting). So what do you think? Yay or nay? Are there other duos you prefer?  The coming week will be a bit quiet for me  since I have a presentation I haven't started yet, and some catching up to do. However, next weekend, if all goes well, there will be some more exciting NARS related posts to look forward to!