Hot chocolate with a double shot of expresso. That's NARS Coconut Grove. It's such a rich, delicious, smooth, buttery, perfect color that's reached holy grail status. I love it so much, that I delayed posting because I was afraid I couldn't do it justice. Silly, but true.

Despite the summery name, NARS Coconut Grove is an eyeshadow single that was released as a part of the NARS Fall 2010 collection. It received stellar ratings from big time beauty bloggers, but I passed, because it was just another brown.  Fast forward to last spring. While google-ing the NARS summer collection, I came across Anne Hathaway's look to the premiere of Rio. She had these adorable glasses, which incidentally made her look bird like--- fitting for a animated movie about parrots, and NARS makeup. I loved the golden chocolatey look of her eyes, which were done with NARS Exotic Dance and Coconut Grove. And that's how I ended up with NARS Coconut Grove. Yes, sometimes I am that impressionable. 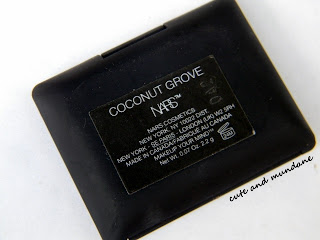 You can see from my various photos that Coconut grove is a very rich dark brown. It leans cool and looks cooler and blacker when indoors or in shade, while in direct sunlight it has the slightest hint of red-brown. Before I attempted my photos for review, I always considered it to be a cool black-brown, kind of like coffee beans. I was quite surprised when my photos showed an earthy brown. So keep this in mind! The true color base may be reflected in my sunlight pictures, however for practical purposes, the color will look like a rich cooler dark brown on the eyes. 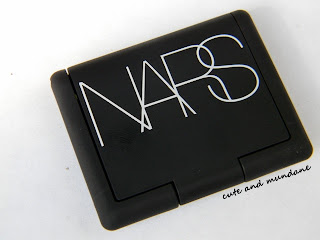 The texture, pigmentation, and blendability ratings are all through the roof. This is why Coconut Grove is not just another dark brown shadow. Other brown shadows may have one or two of those attributes, but not the complete trifecta. When I touch my shadow brush to the pan, it kicks up just the right amount of shadow. Not too soft, not too hard. I like to use a small brush for blending in eyes since the pigment is so strong you could end up with very smoky eyes if you're not careful. This shadow blends so well with any shadow you've laid down under it. Darker liner shades are not usually designed for blending (since they're for lines), so this is surprisingly awesome. I'm partial to cooler colors, so I love blending this with just about anything to deepen a look. I've of course done a classic combo with the gold in Exotic Dance (like the Anne Hathaway look), but I often blend this brown with silvers and greys as well. The brown is cool enough to complement greys, and also adds an extra layer of complexity in that combination.

Oh, and on a side note, this Coconut Grove is my favorite eyebrow filler color as well. Plus, plus, plus, and plus.

You can see that the surface of the pan is pretty beaten up. Despite heavy use, there's not chance I'll hit pan because it's too pigmented.

I've always thought all dark browns are pretty close. In fact, I felt a little guilty ordering Coconut Grove because I figured it would be very similar to Bobbi Brown Expresso. But, fortunately I found that dark browns can be quite different. See below...

Here are my dark brown comparison swatches to NARS Coconut Grove. Please note that these were done in strong sunlight over a larger area; on the eye they're quite a bit darker and more intense.

I was actually quite surprised by the swatches. Coconut Grove always seemed quite dark and cool to me, however it's not nearly as dark or cool as Bobbi Brown Expresso and Bare Escentuals Smoky Quartz (a gift from Jeanie at Makeup Merriment!). Those two are more black-brown liner type colors, while Coconut grove is an exremely rich dark brown. Urban Decay Darkhorse, which is a shimmer, appears warmer than Coconut Grove. I've always considered Darkhorse to be a cool brown, so this confirms that coconut grove is cool as well.

Edit: I've updated my swatch picture to one that more accurately reflects the colors of each shadow. My previous picture, if you saw it, wasn't swatched darkly enough for my liking.

So there you have it. NARS Coconut Grove. It shines amongst cool dark browns. That's saying a lot since I'm quite fond of the other browns as well. I'd definitely recommend it, though it is pricey for a single shadow. There's lots of great browns out there, so you wouldn't be missing out if you had to take a pass, however if you can afford a spot in your stash, it's well worth it. I'd also like to point out that Coconut Grove is one of the six colors on this year's Nordstrom Anniversary palette. And yes, I have been ogling that palette ever since Karlasugar's swatches came online.

Thanks for reading! Let me know if you think you've got a shadow that can measure up to this one, brown or otherwise. I'd love to hear.