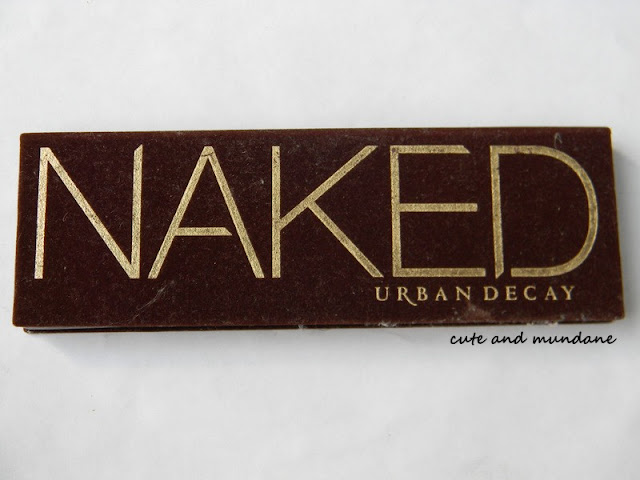 Nearly a year has passed since I bought my Urban Decay Naked palette. When I bought it, my Naked palette was one of last few left in the city. I was a relative newbie at the time and the $44 price tag was still scary, so I hemmed and hawed until all the Sephora stores and Sephora.com were hopelessly sold out. Imagine my elation at finding a precious few left at Ulta! It was one of my first truly exciting makeup moments.

So what has become of this palette a year later? Is it still love? You can see that the chocolate velvet cover has become quite dusty over time. I thought it would be an interesting to post my thoughts on a product a year later. I'm also posting a more complete set of photos, swatches, and review of the Urban Decay Naked palette, as compared to my first entry. 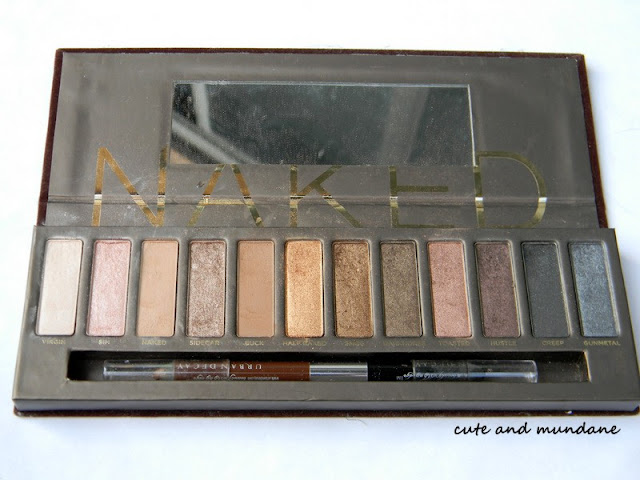 Initially I got a lot of use out of this palette, after throwing away my only Bobbi Brown palette which had gone bad due to heat. I used mostly Buck and Naked (nice play on words, UD), which are the two mattes in the collection. I was into mattes at the time because I didn't know how to apply shimmer on my eyes in a way that didn't look gaudy. Unfortunately, most of the colors in the palette were shimmers. The shimmery shadows are fabulously pigmented and smooth. However, mattes are not. Buck and Naked were a bit chalky and no where near as awesome as the Bobbi Brown mattes I'd been using. (It's an unfair comparison, since no-one does mattes as well as Bobbi). Because of this, I couldn't use the palette to its full potential and my palette fell out of favor quite quickly once I got my hands on new makeup.

However, this isn't a sad tale of back-of-the-drawer palettes, it's a story of re-discovery. Over the year, I didn't find myself using the palette for my makeup, however often pulled it out to experiment, even though those looks rarely made it out of the house. More recently, I've begun to love shimmers shadows thanks to NARS Dogon. After wearing the taupe in Dogon nearly every day for 2 months, I needed new and exciting neutrals while I awaited the Fall 2011 collection. That's how I fell in love with my Naked palette again. 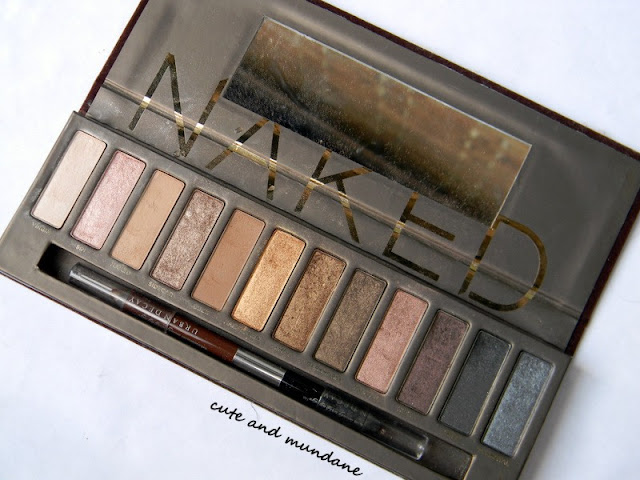 Looking with fresh eyes and more makeup know-how really made me appreciate the NAKED palette more. The color range is so broad and great for experimentation. There are brown, pink, gold, purple, and grey tones in the same palette. Additionally, it has both highlighter and liner colors. It's hands down the best starter palette for someone getting into makeup. For someone like me, it's still useful. Pinks, purples, and warm browns aren't my taste, but it is nice to have them if I feel like mixing things up.

On to the palette. There are twelve full-sized shadows. Excepting Buck and Naked, all are highly pigmented shimmers. The high pigmentation, which is a plus for the majority of makeup users, was why I had difficulty initially. I tend to like sheerer colors and need to use a lighter hand when using this palette. The shimmer shadows are soft and easy to blend with no fallout. Really, really nice. Like I said before, the matte shadows aren't as nice, but they're still good quality and nice colors.

The first half of the palette holds the lighter colors: Virgin, Sin, Naked, Sidecar, Buck, and Half-Baked. 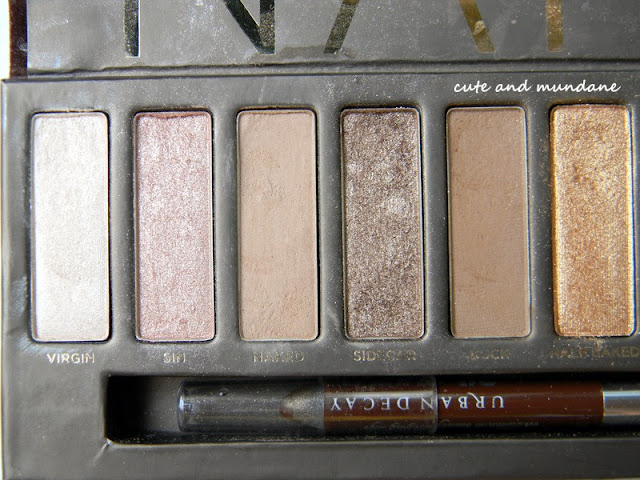 The second half holds the darker tones, including: Smog, Darkhorse, Toasted, Sidecar, Hustle, Creep, and Gunmetal. 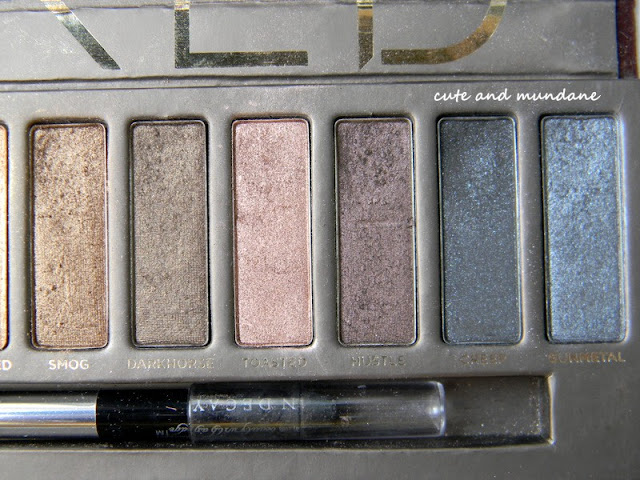 Here are swatches of all colors in the Urban Decay Naked palette on top of Urban Decay's primer potion. Some swatches have a couple chunks, but that's due my brush being a little damp due to cleaning in-between colors. 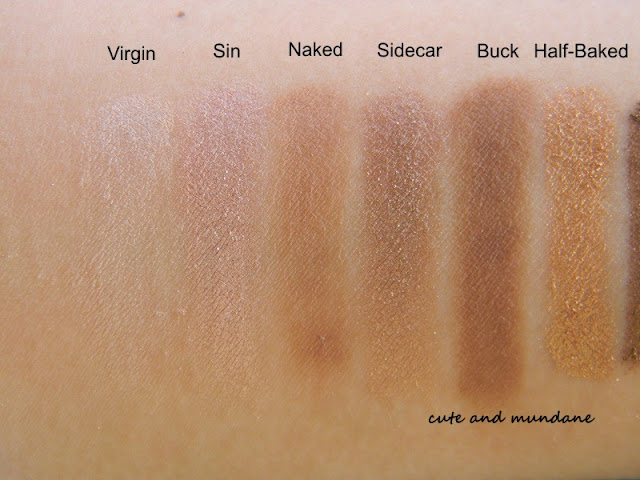 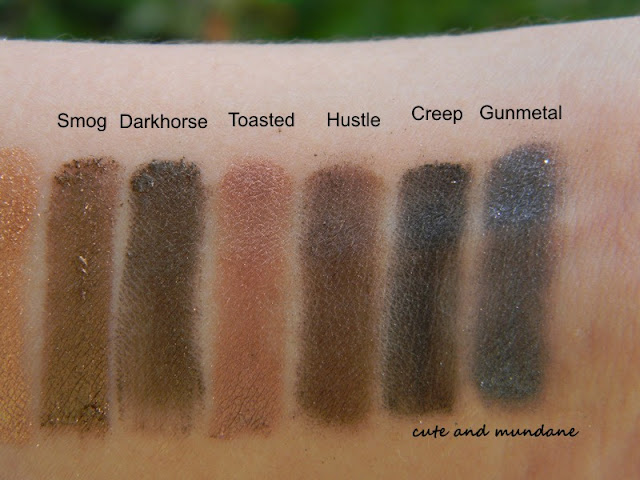 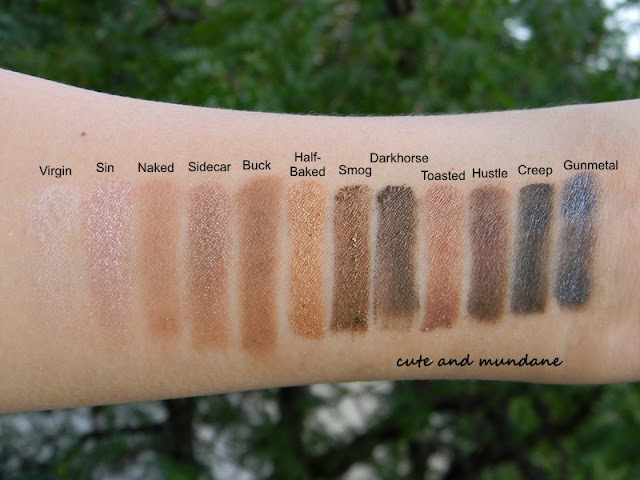 My favorite colors in the palette are Sidecar,  Darkhorse, Creep, and Gunmetal. Sidecar is a surprising favorite considering that it's very glittery. The slight rosy tone makes it beautiful. Darkhorse is a rich cool brown with subtle shimmer. When I bought the palette, I knew I was going to love it, and it did not disappoint. Creep is a great blendable black for a blackened smoky eye. Gunmetal is a blue-leaning metallic grey that's so pretty. It might be difficult to blend into warmer complexions, but in small amounts it would be gorgeous, even as a liner.

Before I start summarizing, one last decadent look: 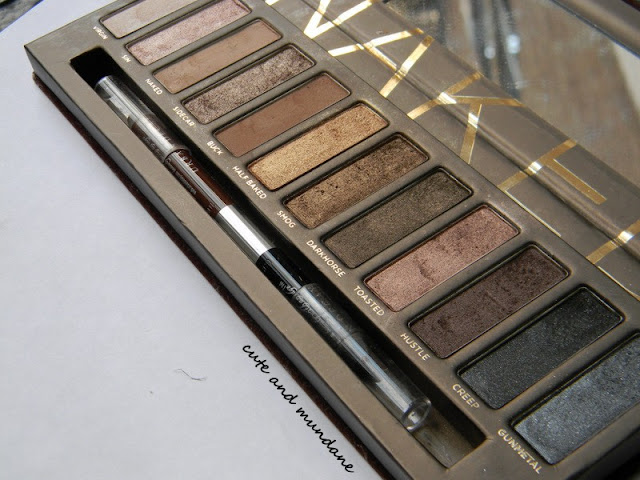 Overall, the more I learn about makeup, the more I appreciate this palette. It's got great quality and color variety for an incredibly reasonable price.  The pigmentation is ridiculous, and sometimes less-is-more when using these shadows. The palette shown is the original version, however the more recent palettes have a full-sized eyeshadow brush included instead of the dual ended zero/whiskey liner included in mine. It can't get better than that. I really wish they'd thought of that sooner; who doesn't need another high quality brush? Overall, I'd still rate this with an A+, even a year later.  Now, if only Urban Decay would make a cool neutral palette, I think I would just about go nuts!
Thanks for reading, and I hope you enjoyed my re-examination of my Urban Decay Naked palette. Do any of you have this in your stash and still love it like me? Or is it a thing of the past?
Love, Dovey