When I saw the first promo images of NARS Grand Palais Duo Eyeshadow, I was skeptical. The silver taupe looked amazing, but the rose...? Rose is for cheeks, not eyes. I'm sure many of us have heard that red or pink-toned eyeshadowed make eyes look tired, which is generally not desirable. However, at this point, I don't have the willpower to pass up NARS duos. I have too much faith and Nars' color renditions, and I'm up for a little experimentation. I'm so glad I took the jump, because Grand Palais has become a surprise favorite! You can see I've already begun to make a small dent in the pans.

NARS Grand Palais has a silvery taupe paired with a dusty rose. The silvery taupe has subtle shimmer/sheen, while the rose is matte. Both have smooth blendable textures, and are somewhat sheer. I know people complain about certain NARS duos being sheer, however sheer isn't necessarily the mark of a poor quality shadow. Translucent pigments, when done well can make difficult colors wearable and meld better with every skin tone. I like the idea of having my version of silver taupe. Highly pigmented colors, do of course have their place, but high pigmentation does not automatically confer higher quality. For example Urban Decay and MAC are quite renowned for pigmentation, but some of these colors can look gaudy or overdone on me. I don't need my shadow to scream "I'm wearing ROSE!!!". (By the way, I like Urban Decay and MAC a lot, they're just a different sort of makeup beast.) At one point the NARS website specifically described the duos as being "sheer," but I think they took that description down because people think of sheer in a negative light. Point is, sheer is good in this case.

Back to a more positive note, I really like Grand Palais. I've been using it every day since I've gotten it. The silvery taupe is as lovely as I hoped. My skin is quite tanned now (at least NC25, I'd guess) and the color is subtle on my eye. The color is certainly visible as a shadowy taupe, but it's a natural look that's nice for daytime. The shimmer isn't overt, however the slight amount helps the eye stay luminous despite the grey tones. The dusty rose is quite pretty. The faded color makes it wearable, especially when blended with other colors.  On top of the silvery taupe, it has a more mauve-ish appearance. On top of the ultramarine NARS Outremer shadow, it takes on a plummy tone. I think those with skin tones with more yellow will find the rose side easier to wear. However, the rose is well done and sheer so that I imagine almost every skin tone could get it to work. It just depends on the rose to taupe ratio. 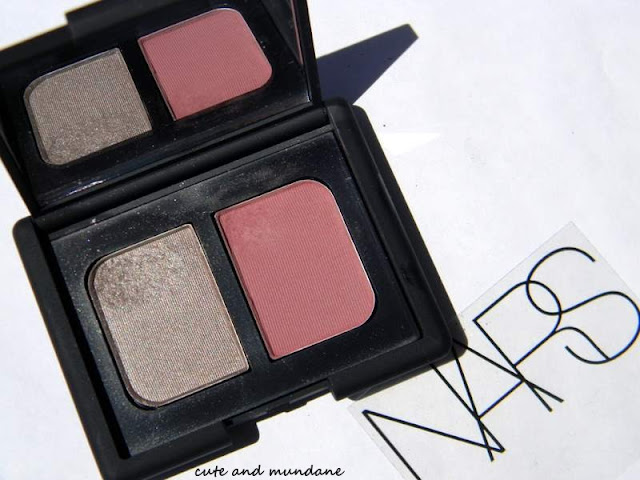 There are three general methods to use this duo. Fortunately, some great bloggers have posted different looks with Grand Palais already, so I'll link them here. The three methods are:

My favorite method is #1, silver taupe all over the lid and rose in the crease. This is the most natural look for me. The other two favor the rose, which are also quite pretty, but make for a more dramatic look that can give me a red-eye I'm not careful.

Before this season, I was never a crease person; my eyes aren't so deep set, and I feel like dark crease colors can look comical. However, after my National Artist makeover with Jennifer, I was inspired to get creative with crease colors. I'm glad, because this palette is well suited towards for it. The touch of rose in the crease adds the perfect amount of depth, while contributing a bit of berry color to the overall look. It's not so much that my eyes look outright tired; however it does give them the chic slightly tired-eye look that's perfect for fall.

In terms of product pairings with NARS Grand Palais, NARS Outremer works quite well as a liner for daytime, or blended in with rose for a plummy night-time look. Usually I'm too lazy to use a wet shadow as liner, so I've been lining with Urban Decay's 24/7 pencil in Zero. I haven't used the rose side as a blush; it would make an awfully expensive blush and use up a good bit of eyeshadow. I think NARS Oasis, which is promoted along with the Fall 2011 would make the perfect blush; it has a similar pinky mauve tones, but isn't too dark. On a related note, a SA blended Oasis into my eyeshadow the other day and it looked quite nice. Too bad I'm avoiding blush due to potential allergies, and too bad I gave my Oasis to my mom anyway =P.

I thought it would be interesting to see how the silvery taupe compared to the taupe / grey halves in NARS Dogon and Tzarine, so I've made comparison swatches below. I also pulled out Bobbi Brown Rockstar and Flint. Surprisingly, my taupe collection doesn't run very deep. 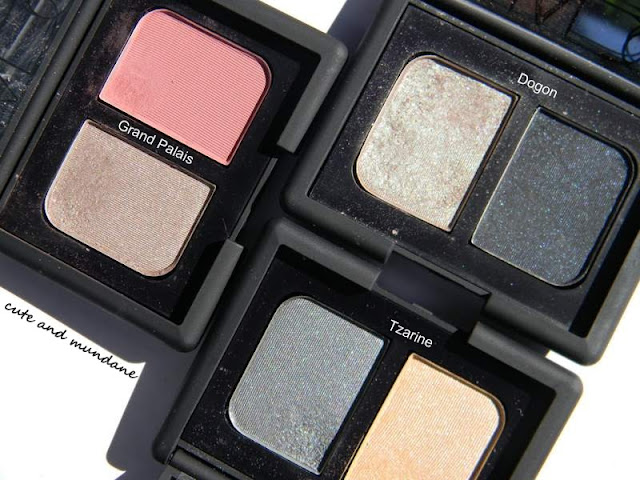 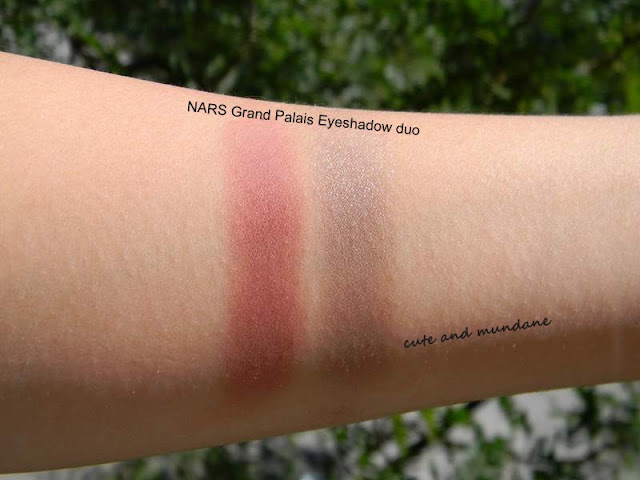 As you can see below, the silvery taupe in Grand Palais is cooler and taupe-er than NARS Dogon. I retook pictures multiple times, and somehow Dogon kept appearing quite pink, which was confusing. I think it just looks pink relative to the other colors. NARS Tzarine is clearly grey, while GP is not. Bobbi Brown Rockstar which is a shimmery silver looks more silver than our silvery taupe. Bobbi Brown flint is a matte, but it looks closest in the comparison. I've always considered flint to be a nice greyed taupe, so that's what GP is as well. 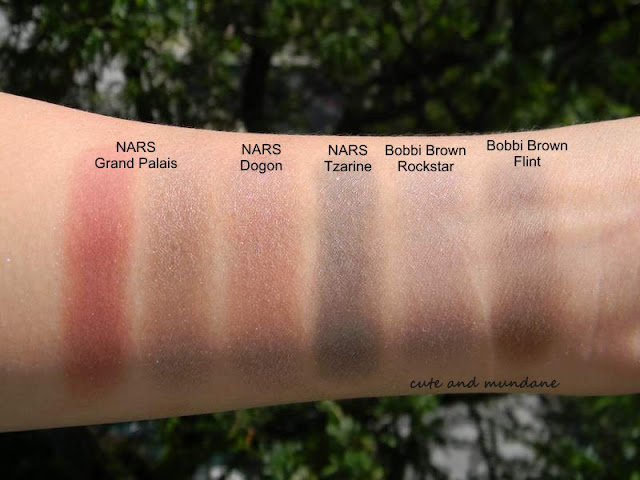 Finally, some art inspiration for inspiration. I stumbled upon this Rothko, while browsing the art museum. I was taken aback by how the colors used in this painting were uncannily similar to the the palette in NARS Fall 2011. (Note: in real life, the colors were even closer. The red looked more faded and mauve, while the middle band looked more taupe. This was the best my camera could do with no-flash museum photography). Along with the taupe and maroon base, you can see that the top color block has a plummy hue, kind of like what happens when you mix the rose in GP with Outremer. You can even see ultramarine Outremer-like blue peeking out from the sides. I guess in the parallel modern makeup - modern art universe, masters of color think alike! Is it a coincidence that NARS and Rothko are both favorites of mine? I think not.

So in summary, NARS Fall 2011 has an expectedly unexpected color palette. NARS Grand Palais is my new favorite, for at least this season (even over Outremer) despite my initial qualms. You can achieve a few different looks, although they won't be of the bright-eyed variety. The silvery taupe will be great for any season, while the rose may be more fall/winter. If you're looking for something fresh to experiment with, this could be for you. If you're looking for more long-term value, or the rose makes you nervous, try before you buy. I can't say everyone will love it!

Thanks for reading; I had a lot of fun working on this entry, and would love to hear your feedback.

P.S. Because of my cultural ineptitude, I had to look up Grand Palais in wiki. It sounded familiar (in retrospect most likely due to Chanel) but I couldn't put a finger on it. I've included the link here in case there's a few of you out there who are like me.
Posted by Dovey at Monday, August 01, 2011