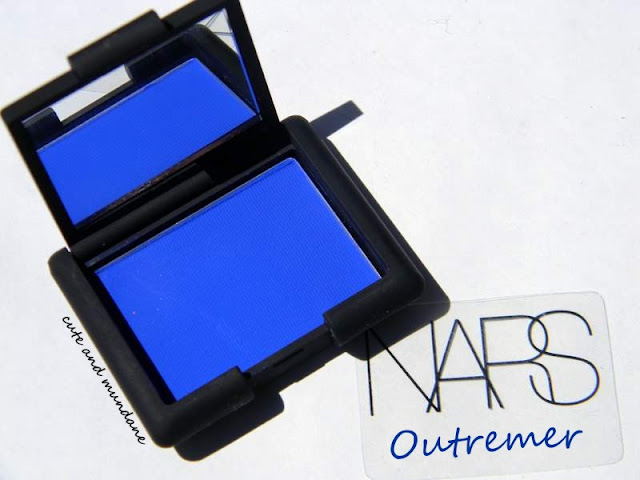 Mesmerizing. That best describes NARS Outremer eyeshadow single. Despite all logical reason, I knew I had to have this ultramarine shadow. I'm quite conservative in my shadows and Outremer is the equivalent of eyes-gone-wild. My obsession grew over time, as they often do when you've seen the forbidden fruit months before its release. I was so nuts over this color that I spent one of my precious few questions at Francois Nars' book signing on the topic of Outremer (more on that later).

Though I had no idea how exactly I was going to use Outremer, I could tell it was going to look stunning on brown-eyed girls. After all in makeup color theory, we know that blue is the classic color to bring out browns. This made me secretly gleeful, as I'm always envious of how so many colors seem to bring out blue, grey, and green eyes =P. I had no idea how to work the color, so I had a NARS artist demonstrate for me, and I have instructions in my previous entry. I think many have tried Outremer alone, radiating outwards, which is a similar idea to the Fall campaign cover model. In terms of blending colors, maroon, plum, black, bronze, and silver taupe complement Outremer nicely. If you notice, they're mostly striking or metallic tones. I think blending in your standard medium neutral tones wouldn't do Outremer any favors. The color needs to be be preserved and complimented/contrasted with colors that can match that intensity.

For examples of bloggers with Outremer eyes, take a peek at Getting Cheeky, Temptalia, and Makeup and Beauty Blog. On another note, I believe that MAC Atlantic Blue is a reasonable dupe. I don't own it, but I did compare in-store, and they are quite similar. 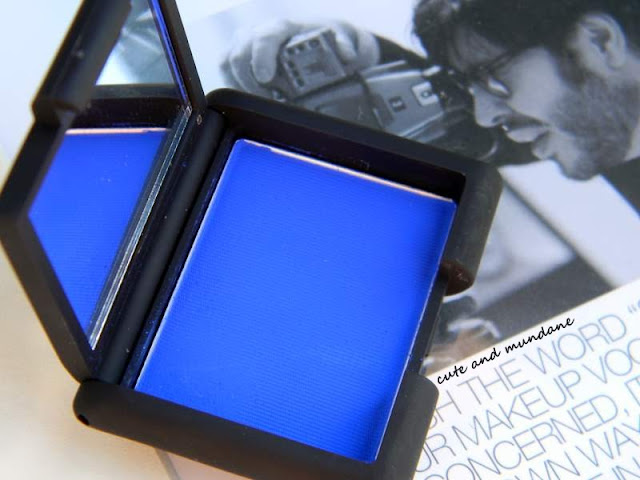 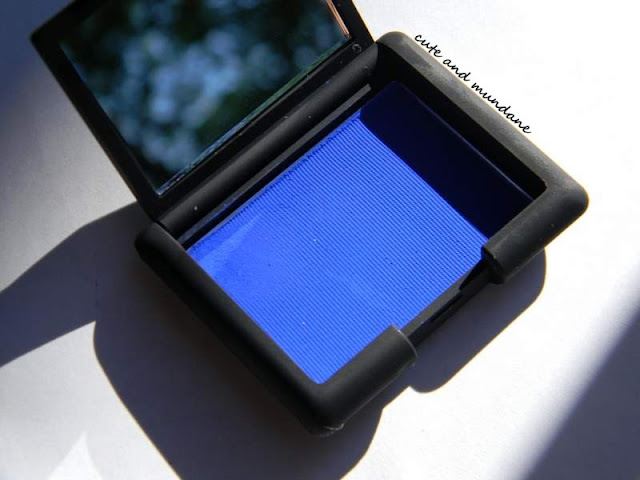 The ultramarine is so intense. Every time I gaze in, I almost feel like I'm being sucked into the little pan (a la pensieve in Harry Potter). 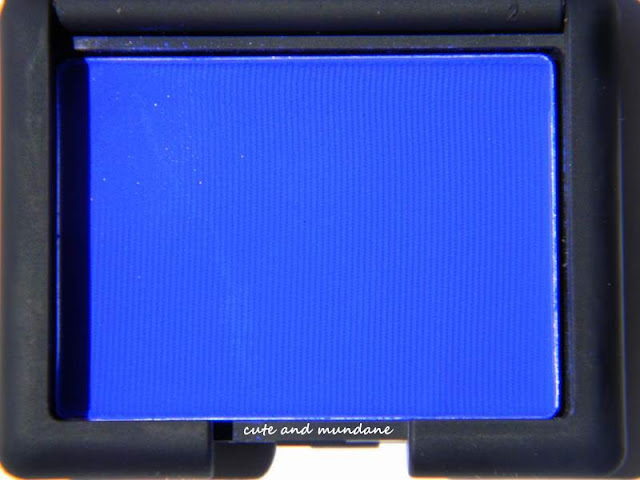 On my last entry, I went on a ramble describing how sheer eyeshadow can be a good thing if done well. Outremer is also sheer, although not in the "good way" I was talking about with the NARS Grand Palais duo. In the swatch below I've applied Outremer in light and heavy swatches with a eyeshadow brush over UDPP. You can see the light swatch is incredibly sheer and a little patchy. The heavy swatch shows a lovely color; though keep in mind it took my nearly 10 swipes with the brush to get there! High maintenance (coined by Jessica of Getting Cheeky) is the perfect phrase to describe it. To get around the sheer/patchy issue, one could either use a stickier base, like a cream shadow or concealer, or use a wet brush. When a wet brush is used, the color goes intensely, just like in the pan. Very pretty.


Now, I'll return to my Francois Nars tale. As he was signing my three books and cheek kit, I squeezed in as many questions as (semi) politely possible. One dealt with Outremer, my obsession at the time. I asked what the inspiration behind the color was, after all bright ultramarine blues don't just pop out of nowhere. Mr. Nars nicely responded that the color was inspired by Klein blue. Klein blue is an ultramarine blue mixed and made famouse by the (of-course-French) artist Yves Klein's monochromatic works (see them here). You can see that he often used the human body itself as a "paintbrush." I'm sure so much makeup is inspired by art; I just wish I could know all the back-stories behind each color.


With that in mind, I though I would be wonder-blogger and post a photo of a Yves Klein artwork, however this didn't work out as I'd imagined. The Kleins weren't on display, boo. So I did the next best thing, took a step back in history and found beautiful blues in French impressionist works (which, by the way weren't in short supply). Outremer means overseas, so I took the water theme to heart.

So in summary, Outremer is a beautiful ultramarine shadow that is a bit finicky. To be honest I haven't gotten much use from it yet. I love it as a wet liner, and I'm sure I'll love it as wet shadow; however using shadows wet causes me to worry about its lifetime. I suspect that before reading this review most will already have made up their minds on the love it or leave it matter. So, I hope you enjoyed my photos review and random ramblings regardless of how you feel about the color. I'd love to hear your thoughts.