MAC Hey Sailor, before it sails away... 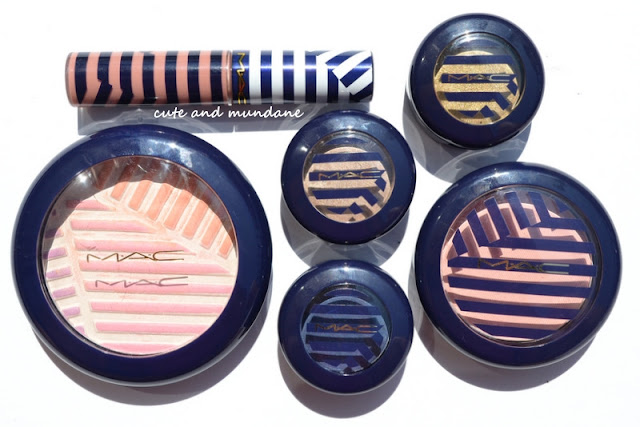 While in NYC, I passed by the MAC store on Bleecker Street and noticed that they still had the storefront windows decorated for the MAC Hey Sailor collection. On the internet, all these collections seem to blowy by so quickly, however reality lingers a bit longer. I figured it still wasn't too late to post a quick review and swatches from the collection. A smattering of items are still left online and in-stores. (Plus, we know that the leftovers will soon end up in the Cosmetics Company Store). I thought MAC Hey Sailor was a very wearable and well done collection. The simple, clean, and pale colors mixed with navy did evoke imagery of a crisp white sailors' uniforms, sun sparkling off the water, and deep ocean waves. Normally, I'm not too into seasonal packaging, however I though the nautical stripes were quite adorable. 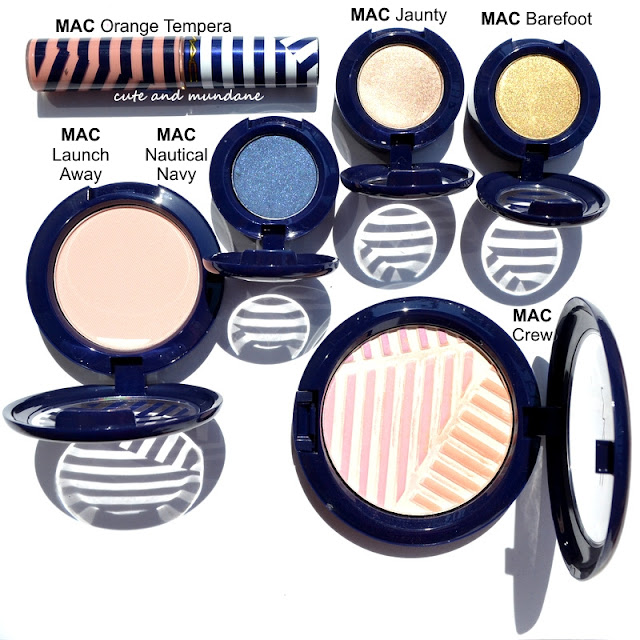 On to swatches! MAC Orange Tempera lip glass is an orangey peach. I thought it would be difficult to wear, but I've been favoring it lately. It's a light, but not too light nude peach on my lips. MAC Launch Away blush is a really pretty pale pinky peach. It looks more peach in the pan, but wears a bit pink due to skin undertones. You can see from the swatch below that it's quite light on my currently medium toned skin. This would probably be best for light skin tones, or when you want a really subtle blush. It's really similar to NARS Sex Appeal, however the NARS is more peach and less pink. You can see that I haven't had the heart to work much on MAC Crew Highlighting Powder. It's a very pale beige highlight. My swatch has a bit more pink and orange mixed in due to the overspray. MAC Jaunty eyeshadow is a really pretty light beige frost eyeshadow. It's great for brightening the eyes. This is going be a really well used color in my collection. MAC Barefoot is a unique grungy gold veluxe pearl eyeshadow. It's yellow gold, but not in a particularly warm way. It has a sort of greenish tinge to it, which is kind of cool. MAC Nautical Navy is a navy satin eyeshadow with a beautiful blue sheen in the pan. It is kind of a problem child to apply; it's a bit chalky and doesn't spread ideally. It would probably work better as a liner shade. 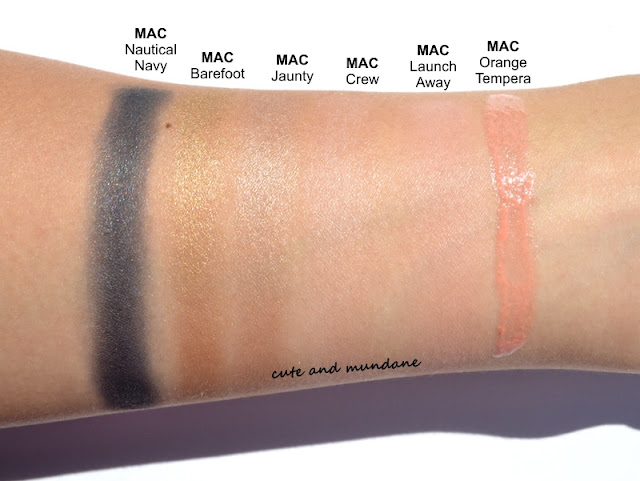 Thanks for reading! Right now I'm particularly smitten with MAC Jaunty eyeshadow, Launch Away blush, and Orange Tempera lipglass. I'm always a fan of classic light tones! Did you pick up anything from MAC Hey Sailor? What has your favorite MAC collection been this season?