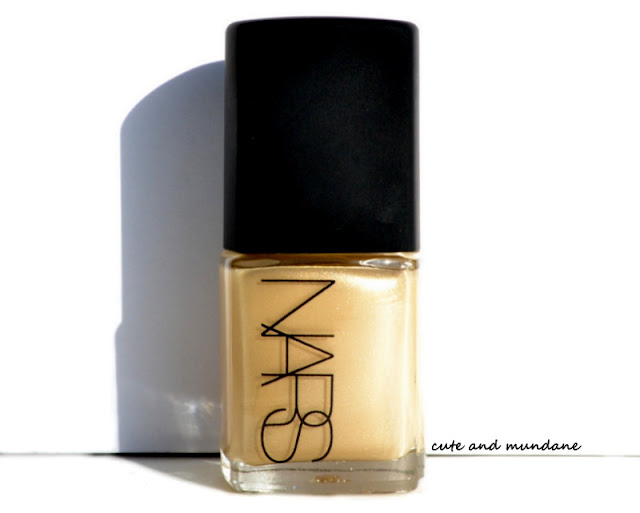 NARS Versailles is a nail polish with regal inspiration. Its namesake palace is famed as one of the most beautiful buildings in the world. However, if you'll indulge me in a brief bit of history, Versailles was not always the paragon of grandiosity it is today. It was a small village located on the outskirts of Paris. Louis XIII, who was pleased with the location as a hunting ground, ordered the construction of a hunting lodge in 1624. The Château de Versailles became the center of French politics in 1682 when Louis XIV (The Sun King) moved his court from Paris and subsequently expanded the lodge into a palace. It was inhabited by the royal family until 1789 when ill-fated Louis XVI and his wife Marie Antoinette were forced to return to Paris at the start of the French revolution.

I had the good fortune to visit Versailles back in the 1990s on a family vacation. If there's one central theme to the Château de Versailles, it's gold. Gold trim graces all aspects of the palatial detailing, transforming the palace into a fiery golden mirage underneath the midday sun. You might be able to appreciate this striking effect from the photo above of me and my brother. My childhood memories of Versailles have long since faded like the aged mirrors of the Galerie des Glaces, but golden flashes still emerge through the silvered fog like the stallions leaping through the fountain's spray in the Basin d'Apollon. Although nothing can compare with the palace in its full midsummer glory, NARS Versailles retains the spark of golden splendor that makes Versailles so memorable.

NARS Versailles nail polish looks like an alchemical amalgamation of gold with pearls (if that were at all possible). It's a unique golden champagne with a pearl finish; the color is not as metallic or 18K toned like many gold nail lacquers, nor is it as rosy as most champagnes. Although NARS Versailles is described as a sheer  formula color, I found that it becomes opaque with two coats. 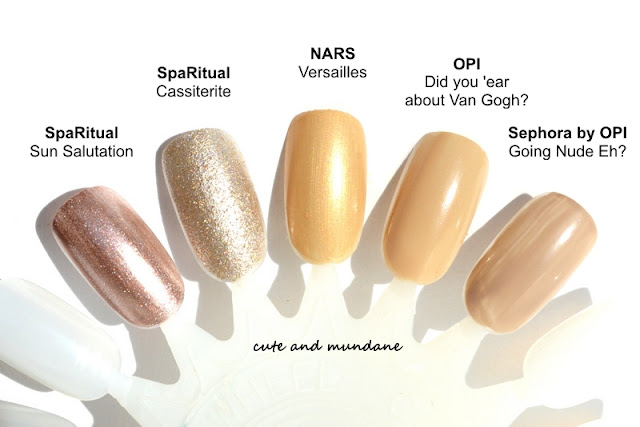 I've compared NARS Versailles to swatches of other colors in my collection above. Versailles lacks the rosiness and metallic finish of SpaRitual Sun Salutation. It's significantly more gold. SpaRitual Cassiterite (reviewed here) is a platinum gold glitter polish that is lighter, cooler, and less yellow than Versailles. I've swatched two beige nail colors of similar intensity to better demonstrate undertones. The warm beige of Sephora by OPI Going Nude Eh? more closely matches the undertone of Versailles. OPI Did you 'ear about Van Gogh (reviewed here) has a cooler tone.

NARS Versailles truly bottles the golden glow of the palace in my childhood memories. This post highlights the reason I've been long enamored with NARS; the brand creates impeccably nuanced colors that are drawn from worldly inspiration. As you might know, I love beauty that has been 'Inspired By' art, life, and travel! Thanks for reading! Have you tried NARS Versailles or any other shades of NARS nail polish? What is your go-to gold nail polish? What brands inspire you?

P.S. For more on NARS + French inspirations, check out this blush post.
Posted by Dovey at Saturday, December 15, 2012