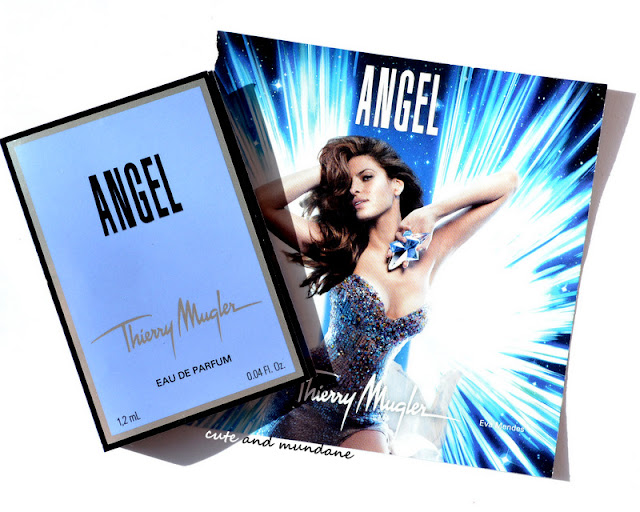 Today's the day I face my fears and finally write about Thierry Mugler Angel Eau de Parfum. As someone who typically enjoys light florals,  the oriental gourmand fragrance's expansive list of notes and patchouli-heavy character was certainly intimidating. However, Angel is one of those fragrances one should really experience at some point in life; after all, the perfume (created in 1992), was inducted into the FiFi Awards Hall of Fame in 2007.

Thierry Mugler is known for crafting fragrances inspired by fantasy. Eva Mendes (seen in the photos) is the current face of the Thierry Mugler Angel campaigns, after replacing Naomi Watts in 2011. The multicolor sequined dress, the cosmic flashes of light in the shape of wings, and the sultry look of Eva herself all combine to create a sense of sensory overload that is not unlike the fragrance itself. Thierry Mugle Angel Eau de Parfum is packaged in a beautiful asymmetric star that appears stretched out, as if it's getting ready to warp into space. The star can be refilled with decants of Theirry Mugler Angel, which is eco-friendly and adds to the fancy of having a personal shooting star.

The Thierry Mugler Angel experience has a dreamlike character, where childhood memories are drawn out through the litany of notes. Overall, I would describe Angel as a voluptuous scent with fleshy fruits and vanilla caramel sweetness, underscored by generous helpings of dry cocoa powder and patchouli. Thierry Mugler Angel Eau de Parfum opens with dewy fruits enmeshed with a sticky candy sweetness. The fruity burst is an unusual combination of melon and tropical fruits; I get a good helping of honeydew, citrus, and coconut. Likewise, the sweetness is a full combination of the gourmand greats : vanilla, caramel, and tonka; the lot is more delectable than the sum of its parts. Over time, the fruits transition into their more dark fleshed varieties, namely plums and blackberries. As the fragrance draws out further, I get a distinct nectarine and hints of apricot. The base of the fragrance is dominated by a dry cocoa scent and patchouli that run throughout. (Angel does have a reputation of being a patchouli bomb). There are honeyed aspects as well, and a spritz of amber spice. I'm too distracted by the other scents to piece apart the floral notes, which quietly fill in the seams and add to the background ambiance. However, if I had to guess, soft jasmine, orchid, and rose are likely candidates. 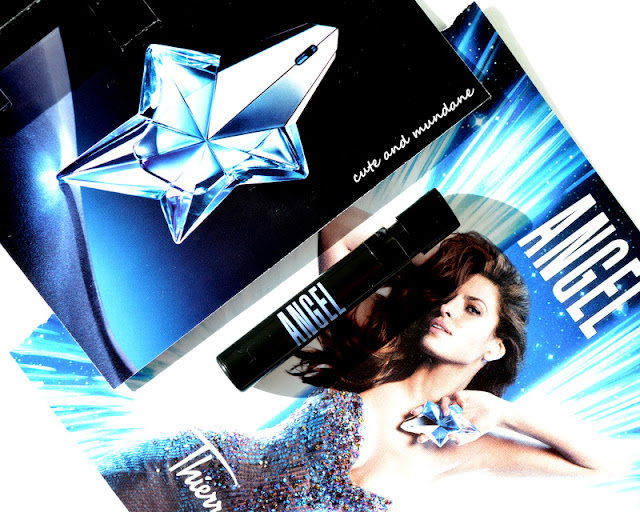 Thierry Mugler Angel Eau de Parfum is a sweet and voluptuous scent filled with a cornucopia of fruits and flowers to add intrigue. Smoky patchouli wafts up old memories, while chocolate adds comfort. I tend to prefer more straightforward scents and find Angel a bit overwhelming, but I can respect its creation; it's impressive that a fragrance can hold together so many individual scents without devolving into a stew. With so many component scents, I think each individual will experience a different emphasis dependent upon unconscious proclivities molded by memory. Though Thierry Mugler Angel is resplendent with fruits and sweet smells, I wouldn't call it childish; though it's weighty and complex, I wouldn't call it elegant. Angel is in a category of its own, and is certainly worth a sniff. Thanks for reading! Have you tried Thierry Mugler Angel? What are your thoughts? Are you a patchouli person?

P.S.  It is worth noting that Thierry Mugler Angel Eau de Parfum should be differentiated from the Eau de Toilette version. The Eau de Toilette was launched in 2011; while it has similar notes, it is not the exact same scent!
Posted by Dovey at Tuesday, January 29, 2013