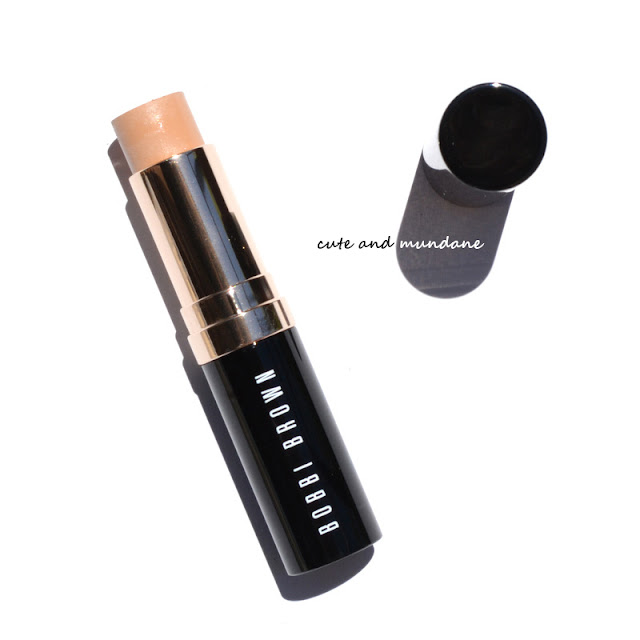 I've wanted to try the Bobbi Brown Skin Foundation Stick for what feels like forever! I love the idea of combining a creamy, blendable texture with a no-fuss applicator. It's perfect for everyday use and handy for the times when I'm on the go (which seems to happen more often than not...).

As someone who's very particular about matching skin tones and undertones, it's a definite plus that the foundation stick comes in 24 shades (the broadest of all Bobbi Brown foundations)! I decided to go with Bobbi Brown Skin Foundation Stick in Cool Sand (2.25), a relatively new shade in the brand's lineup!

I'm quite excited to see Cool Sand (2.25) as a new shade in the Bobbi Brown foundation range! Bobbi Brown foundations are yellow-based (which, historically speaking, was an important concept for the line). They look natural, but tend to run on the warm side. As someone with a hint of pink in my natural undertone, I do need a little bit of pink/peach in my foundation to make it match my neck. I think Cool Sand is a much-needed a cooler counterpart to the existing shades Sand and Warm Sand.

The best part of the Bobbi Brown Skin Foundation Stick is the ease of application. I apply the stick directly to my forehead, nose, cheeks, and chin. (I think it works better this way as the product warms up on skin, preparing to blend). The formula is creamy and blendable, though it does set over time. It's easy to draw on / layer on parts that need more coverage. 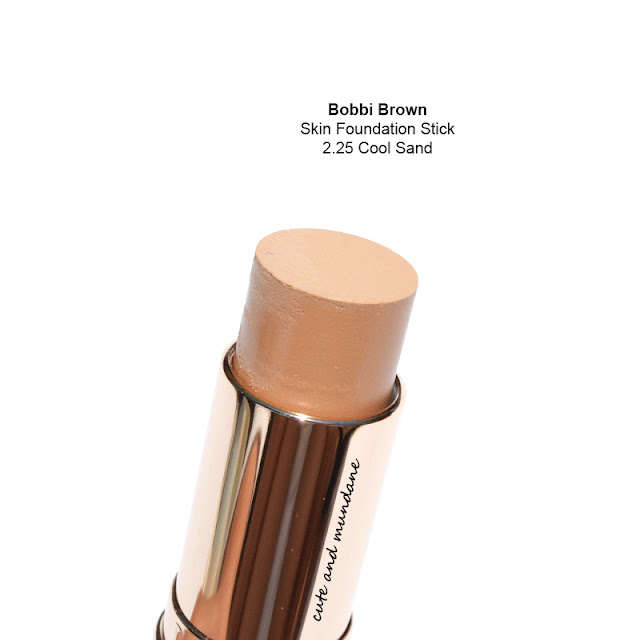 I have a feeling that Bobbi Brown Cool Sand may have been an awesome match for my light skin pre-Palm Beach. However, as I've mentioned previously, this Chicago girl's a shade or two darker thanks to some time in the sun! So, keep that in mind when examining my swatches below!

Despite my recent shade change, I really like how Bobbi Brown Cool Sand meshes with my undertones. It definitely has a peachiness to it (thanks to incorporating a little cool undertone with Bobbi's typically yellow formulas). I might have to try Bobbi Brown Foundation Stick in Cool Beige in store to see if that slightly deeper shade might be a good fit for the moment!

In terms of shade comparisons, I was surprised to see that Cool Sand was on the lighter end of my foundations. You can see that Bobbi Brown Cool Sand is a touch lighter and pinker than NARS Sheer Glow in Deauville (which is yellow + pink, according to NARS). It's also lighter and cooler here than CHANEL Perfection Lumiere in B20. 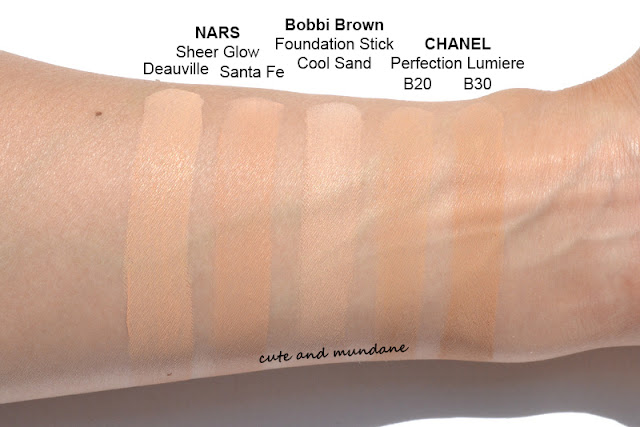 I'm really happy to add the iconic Bobbi Brown Skin Foundation Stick ($44) to my foundation repertoire. I can see why they're so well loved. It's so easy to swipe, blend, then go! The portable shape is really handy for purses or gym bags, unlike your typical glass foundation bottle. The only downside I can think of, is that one could go through product more quickly than liquid formula. Coverage is great and layerable. I'd say the emollience probably makes it well suited for normal to dry skin.

Of course, I'm also really excited about the shade Cool Sand as well (can't wait to put this to good use once my tan fades)! I think it's a much-needed shade in a line that tends to be warm. Hopefully we'll see this popping up in other foundation from Bobbi's lineup!

Thanks for reading! Have you tried Bobbi Brown's foundation stick? What are your favorite cream foundations?

Love, Dovey.
Disclosure: This post contains product(s) sent to Cute and Mundane for consideration. The ideas and opinions in this post are genuine and my own. As usual, no ads or affiliate links!
Posted by Dovey at Thursday, May 28, 2015