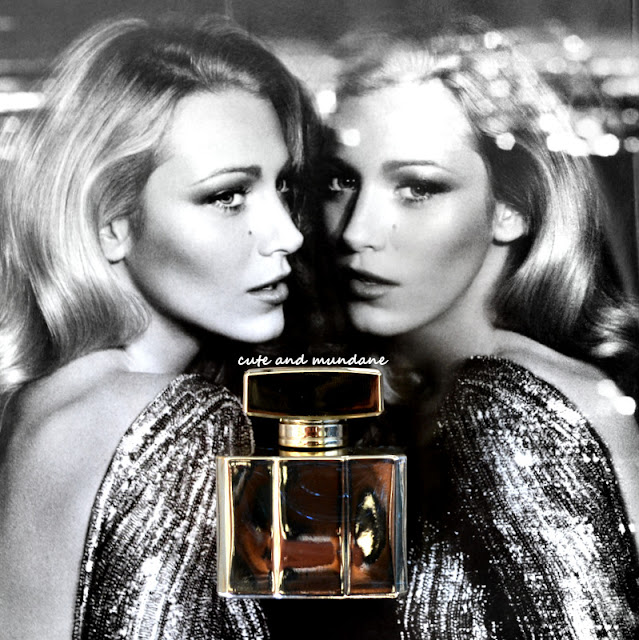 Gold is a quintessential icon of glamour and opulence. With the gold-themed Gucci Première Eau de Parfum, Gucci bottles the essence of a Hollywood 'Golden Girl'.  This is a new niche for the brand --- a sidestep away from their sensationalistic perfumes like 'Guilty' (reviewed here) and 'Envy Me'. In their pursuit of classical virtue over modern vice, Gucci created an elegant golden bottle and classy campaign for their new perfume. The ad campaign features an actress in a long golden gown dripping with sparkling sequins. Wait a second... have we seen this before?

The Gucci Première campaign draws a number of parallels with the iconic Dior J'Adore campaign. In fact, I'd say the resemblance isn't a coincidence; Gucci is probably looking to take a bite out of Dior's market share! Given the striking  similarities however, it's interesting to enumerate the differences in imagery between the two campaigns. Dior J'Adore channels old world imagery (think Golden Fleece, not golden startlet) with its Greek style flacon and sepia-aged august aesthetic. Gucci Première's silvered skyline, on the other hand, conveys the vintage Hollywood glamour of the silver screen. The choice of models reflects this as well. Blake Lively is certainly younger and more 'new Hollywood' than veteran actress Charlize Theron, who has already been immortalized on the Hollywood Walk of Fame. All these points suggest that Dior J'Adore intends to evoke the 'old-world', while Gucci Première simply seeks out Hollywood's 'old-school'.

Gucci Première Eau de Parfum is a citrus-y champagne floral with a leather and wood base. The fragrance opens with a burst of champagne, effervescing as if a bottle has just been uncorked. Bergamot adds a considerable zing, like the tingling of champagne bubbles.' (Somehow I feel as if there are some tea elements tied to the bergamot as well, but I digress). The orange blossom is present concurrently and adds to the sweet fruitiness of the champagne. After your glass of champagne 'runneth over', a white floral becomes apparent.The floral component is more like white petals, not whole blooms; it's definitely not as pervasive as white flowers can often be. The white petals provide a light, lucid perfume that almost becomes creamy; however, they're anchored by a plank of dry wood before getting that far. A leather grain (not suede) joins the mix and gets a little spicy as it matures. At the final dry down, everything becomes much lighter, and you can detect almost all the elements, including the citrus, floral, leather, and wood.

Just like Blake Lively seems to be an 'down-to-earth' startlet, Gucci Première Eau de Parfum is a very approachable scent. The perfume has a lightness and lightheartedness that speaks more to everyday glamour than to a literal red carpet premiere. The lightness may be a downside for some; I've read complaints that the scent disappears too quickly. However, on my skin, I can detect the the dry down for at least a few hours. The wear time likely depends on the warmth or chemistry of your skin, as well as the sensitivity of your nose. While Gucci Première is not for those who wish to flaunt their perfumes, its lightness is not necessarily a bad thing. It's nice for those who want a scent that can be worn day or night without having to resort to something super-fresh or girly. Gucci Première Eau de Parfum channels the Hollywood 'Golden Girl' with a beautiful golden bottle and a startlet in a sequined dress.  It's a good scent, however, it falls short of the glamour and opulence portrayed by the iconic fragrance Dior J'Adore. J'Adore simply evokes more richness and visceral power. That said, it's tough for any perfume, Gucci Première included, to live up to a legend --- I mention it only because the presentation of Première simply begs the comparison.

On its own, Gucci Première is a worthwhile sniff. The effervescent citrus-y champage with white florals is an everyday glamour type of scent that should garner a bevy of fans. The leather and wood base is light and adds the hint of edge suggested by Blake's Janus-like portrait above. Gucci Première is a wearable scent that can work during the day or night. It's typical Gucci, really: a splashy, flashy campaign on the outside with a pleasant and wearable fragrance inside.

Thanks for reading! Have you tried Gucci Première? What was the last Gucci perfume you tried? Do you have a favorite 'golden' scent?