Inspired by Renoir (Acrobats at the Cirque Fernando) 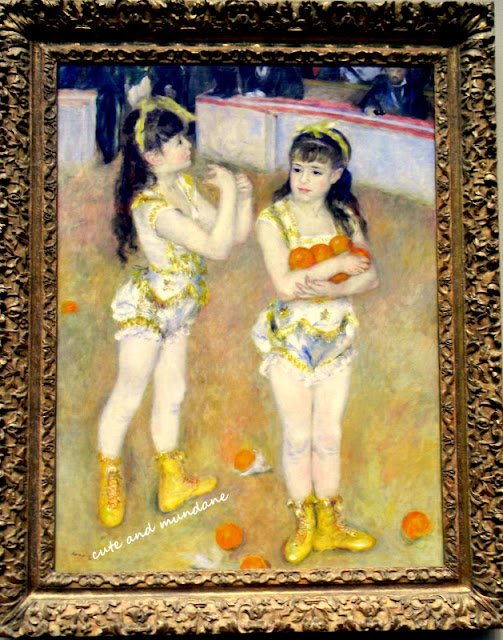 It seems that spring has finally sprung, the changing of the seasons heralded by the blooming of daffodils and dandelions along the city sidewalks. This burst of springtime brings with it a milestone for Cute and Mundane - we've just passed one million page views! So, in celebration, I'd like to share a reflection on beauty and art in this latest edition of the Inspired by Art series- and who better to guide this reflection than impressionist master, Pierre Auguste Renoir!


Renoir was born into a French working-class family in 1841. At an early age, he took a job at a porcelain factory to help support his family. It was there that his talent for the arts was first noticed, and he became tasked with painting intricate designs on fine china. In his early twenties Renoir began studying art formally in Paris, where he met fellow impressionists, among them Claude Monet and Alfred Sisley. Unlike his contemporaries however, Renoir never had the benefit of family affluence or wealthy patronage, and often struggled to afford even the basic paints he needed for his work. Perhaps this is why Renoir painted (and was often criticized for) overly idyllic scenes – scenes that shirked the bitter realities of life, exchanging them for utopian daydreams. Renoir himself once said, referring to his paintings: “There are enough ugly things in life for us not to add to them.”

Renoir's beautiful 1879 painting Acrobats at the Cirque Fernando is a shining example of the dreamy aspect of his work. The painting depicts a pair of happy, innocent young girls collecting oranges tossed by the audience after a successful performance. In reality, the two girls, Francisca and Angelina Wartenberg, are aged 17 and 14, much older and more mature than the painting suggests. Furthermore, it almost goes without saying that circuses (especially of that era) were certainly not innocent and playful places. We could easily write off the painting as a gross embellishment of the truth. Perhaps what we should take away instead, however, is that Renoir managed to take a place as dark and exploitative as the circus, and find a nugget of beauty within it to cultivate and share with the world. 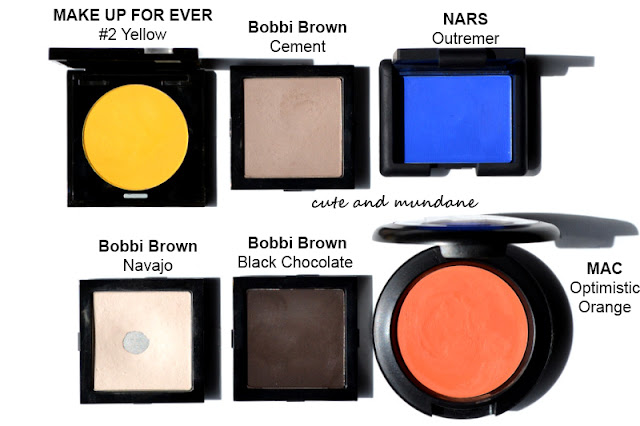 My Renoir inspired look is focuses on yellow, which is present throughout the painting, both in pure and mixed form. Yellow is always a great color for April (think daffodils and rain boots), however it seems to be especially trending this year considering recent offerings from MAKE UP FOR EVER and NARS. To this end, I've included MAKE UP FOR EVER Eyeshadow #2 Yellow, a pigmented yellow. I think yellow can look nice in small doses and, as you can see from the circus floor, it mixes quite nicely with tans. The same concept can be applied to eyes with Bobbi Brown Eyeshadow in Cement. Yellow also plays nicely with the pale pink-white of the acrobat's skin, which I've represented with Bobbi Brown eyeshadow in Navajo. 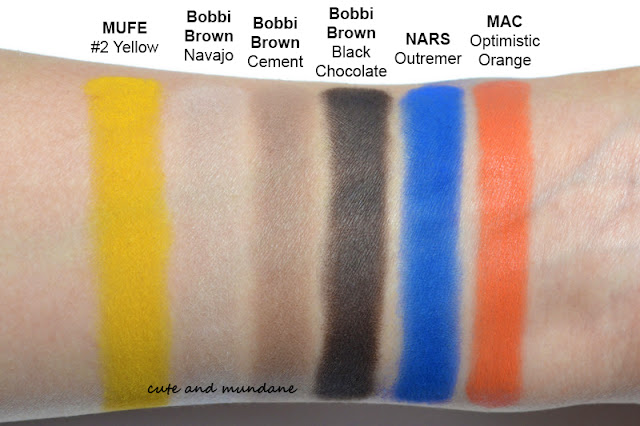 To add definition in this Renoir inspired look, one can use the classic dark brown of the acrobats' hair and eyes. Bobbi Brown Black Chocolate (reviewed here) is a nice dark brown liner shade. For more interest, a brilliant blue can be used instead. You might notice that much of the shading in Renoir's painting is done with a dark blue. My favorite blue is NARS Outremer (reviewed here). An alternative color to pair with the yellow would be an orange, such as MAC Optimistic Orange. 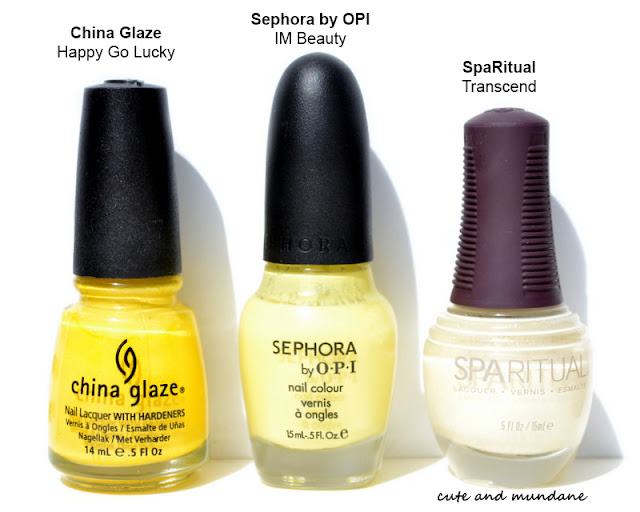 Nail colors are a great way to incorporate the same optimistic yellows and whites of the acrobats' costumes. China Glaze Happy Go Lucky is a bright  decorative yellow, like the acrobat's shoes. Sephora by OPI IM Beauty is a daintier yellow like that of the costume trim. SpaRitual Transcend (reviewed here) is a pale yellow white, like the fabric. 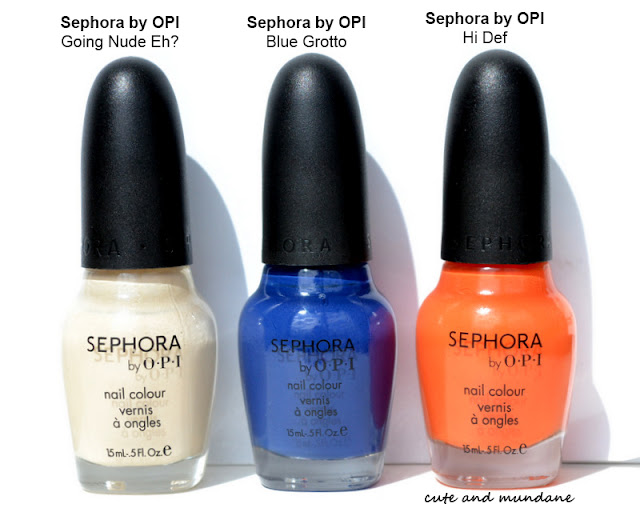 Alternatively, colors from the surrounding could be used to color tips and toes. Sephora by OPI Going Nude Eh? is a pale tan like that of the floor. Sephora by OPI Hi Def is a bright orange. Sephora by OPI Blue Grotto channels the blue of of the background crowd. 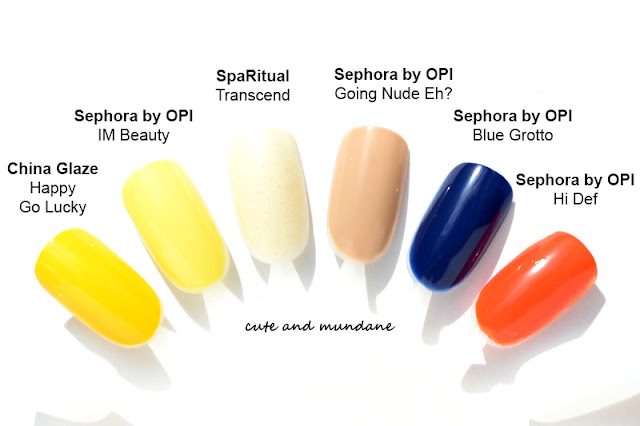 Finally, my Renoir based look wouldn't be complete without a scent to match! For the past couple of Inspired by Art posts, I've been incorporating perfume to quite literally add another 'layer' to the experience. I was particularly inspired by the tissue wrapped oranges tossed to the acrobats, so I've chosen a couple celebratory orange-family scents. Fan di Fendi Eau de Toilette (reviewed here) has tangerine citrus notes, with florals to add a playful whimsy like the acrobats' ruffly outfits, and soft leather, like their yellow boots. A more French option, by one of my favorite perfumers, Jean Claude Ellena, is Hermès Elixir des Merveilles. Elixir des Merveilles is an oriental orange with a delightful round bottle to match!

It's true that Renoir didn't paint a realistic depiction of the Wartenberg sisters. He even went so far as to paint them not from memory, but posed in his studio under natural daylight. (In explanation, Renoir remarked that the circus tent gas lighting “turns faces into grimaces”). What is equally true, however, is that Renoir would have never created such a wonderful work of art had he not seen the beauty hidden in the reality. As beauty enthusiasts, we can take this sentiment to heart; makeup and perfumes may be pleasant to look at and smell, but they aren't what make us beautiful – we've already got true beauty tucked away inside ourselves.

P.S. Be sure to check out more posts from my Inspired by Art series here!
Posted by Dovey at Sunday, April 14, 2013