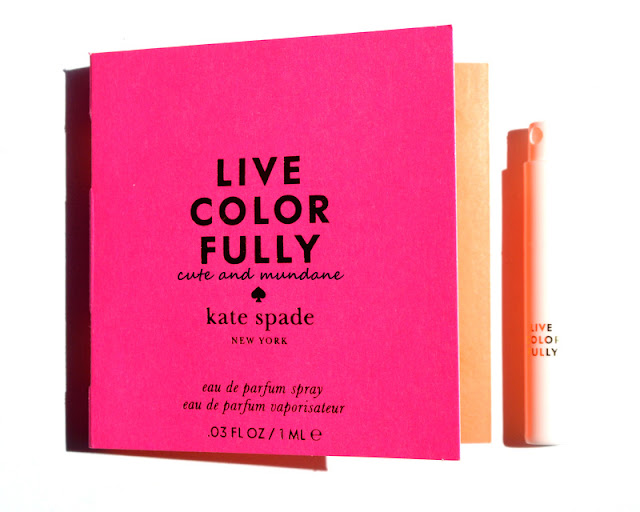 As a color fan-(atic), I'm oft delighted by Kate Spade's colorful creations. The brand has a way with color and imagery that just makes you smile. A few years ago, Kate Spade launched Twirl; I liked it so much that I picked up a rollerball of the perfume. Naturally, I couldn't wait to get my hands on Kate Spade Live Colorfully once it was released!

The bottle for Kate Spade Live Colorfully was inspired by the light refracting properties of prisms. From the front, it appears to be a bright coral. However, a turn of the flask reveals that there are actually two colored panes, one pink and one yellow, (bow)-tied together by glass. This colorful duality is not just pretty;  it also hints at the nature of the scent within (more on that below)!


Kate Spade Live Colorfully Eau de Parfum is a creamy white floral with hints of waterlily and coconut. Rich white florals open the scent; it's easy to pick out the distinct woody green character of gardenia combined with the dulcet and mellifluous tones of its Polynesian relative, the tiare flower. (I love how the scent of tiare practically transports me to the Pacific islands!) After the grand whites decrescendo, a pretty little stanza follows : a soft and sweet mandarin perfumes the air, followed by the aquatic green fragrance of a water lily. It's a segment that provides a delicate breather from the weightiness of the perfume. The white florals return a second time, and along with them comes coconut water, which at first has a cool dry texture, but becomes creamier over time as vanilla seeps in to fill it out. The final dry-down involves white florals, velvety coconut, and a hint of green waterlily. Live Colorfully is very long lasting.

I found that Kate Spade Live Colorfully evoked not one, but two places, which was quite an unusual experience! The first was Tahiti, thanks to the heavy perfume of the tiare flower and coconut. In fact, the tiare and coconut oil combination is a classic fragrance pairing in Tahiti called Monoi. The coconut in Live Colorfully is a slight variation as it smells of the lighter coconut water rather than the creamier milk. The water theme in the coconut provides a lucid transition into a another watery, albeit very different environment. The aquatic green notes of the waterlily evokes the second location: a well shaded garden pond --- perhaps like Monet's garden at Giverny, France! (You can read more about Monet's Water Lilies in my recent Inspired by Art post!) This duality in Kate Spade Live Colorfully was fascinating --- it is both French countryside and French Polynesia in one bottle! 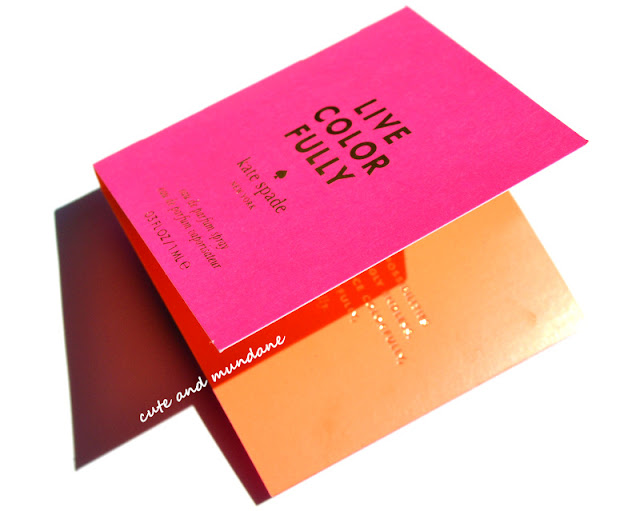 Kate Spade Live Colorfully is a summery white floral with notes of velvety coconut and aquatic water lily. Like the bottle's bright yellow and pink panes that combine to create a cool coral, the scent is a unified duality as well. Through a common theme of water, our noses transport us to a lush island bathed in golden sunlight, as well as to the bright pink blooms of a waterlily pond draped with willows. The resultant combination is both colorful and cohesive.

P.S. For more on the art shown in this post, be sure to check out my Inspired by Art series featuring Monet's waterlilies and Gaugain's Tahiti.
Posted by Dovey at Friday, July 05, 2013