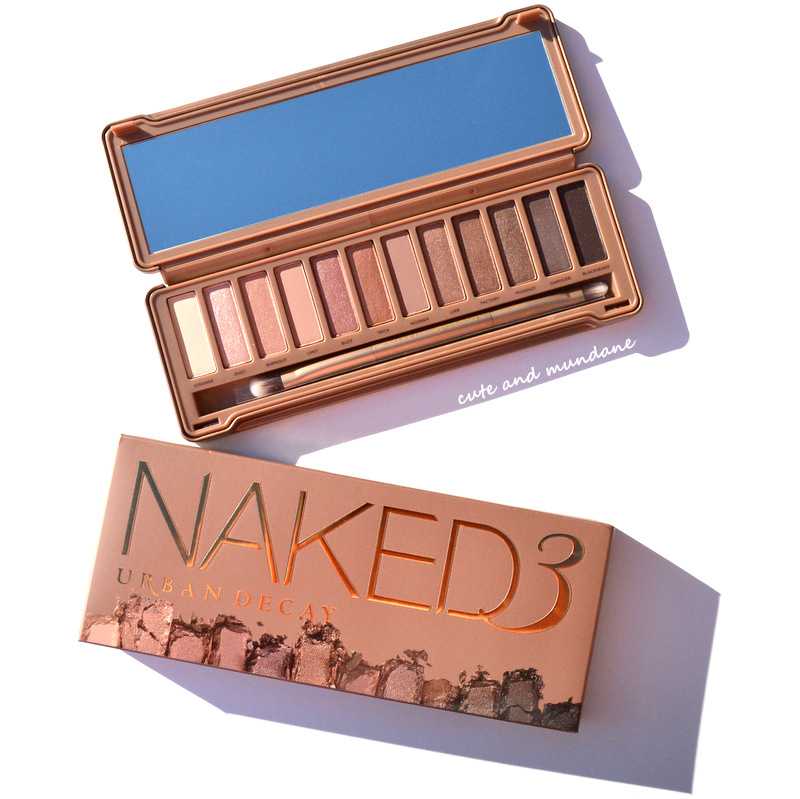 I rarely spring for palettes. Despite being a beauty lover, I try to keep things minimal - which means going for carefully curated singles over collections of colors I don't feel particularly strongly about. It seems that the Urban Decay NAKED series is an exception to my rule, as I now own all three!

That said, I did think carefully before picking up Urban Decay NAKED 3 - after all, did I really need another neutral palette? Ultimately I gave this rosy/ mauve neutral palette a go for two reasons.  First, neutrals with hints of mauve pink tend to look more natural on me, matching my skin's undertones. Second, neutrals are considered 'classics', but they're really subject to trend as much as your typical colors. Warm golden shades a la the original Urban Decay NAKED are out, while mauve pinks are currently in. 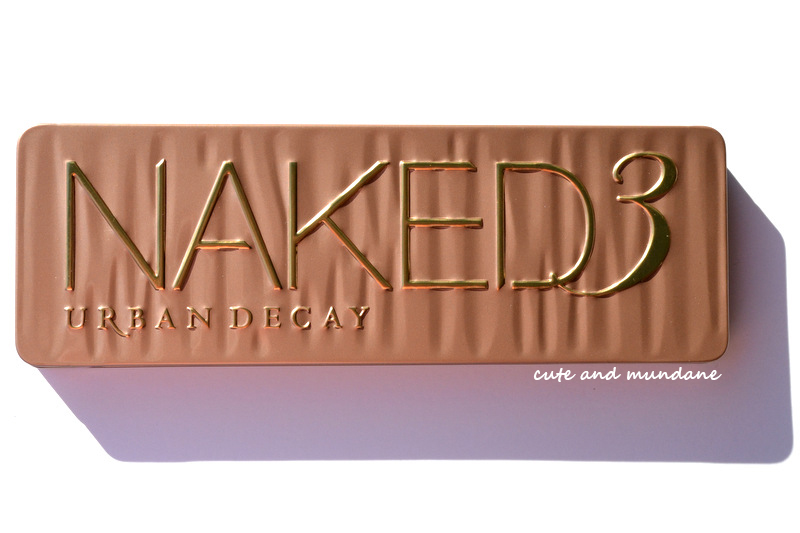 To me, the textured rosy metal casing looks like wave-rippled oceanside sand! The closure and hinge mechanisms are plastic, which initially made me worry about the possibility of breakage. However, my NAKED 2 palette (which has the same construction) has yet to break, so these fears are, so far, unfounded. 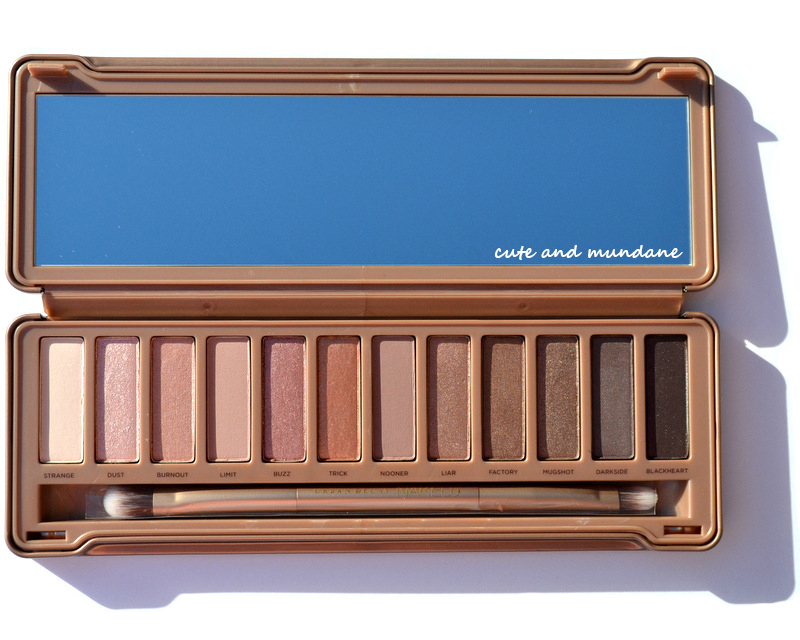 The palette comes with a double ended cruelty-free brush, which I definitely prefer over their pencils. One end is a fluffy shadow brush and the other is a smaller flat paddle. Overall, I find that Urban Decay brushes work well with their products. The light-handedness of a synthetic bristle brush is good when working with highly pigmented shadows. 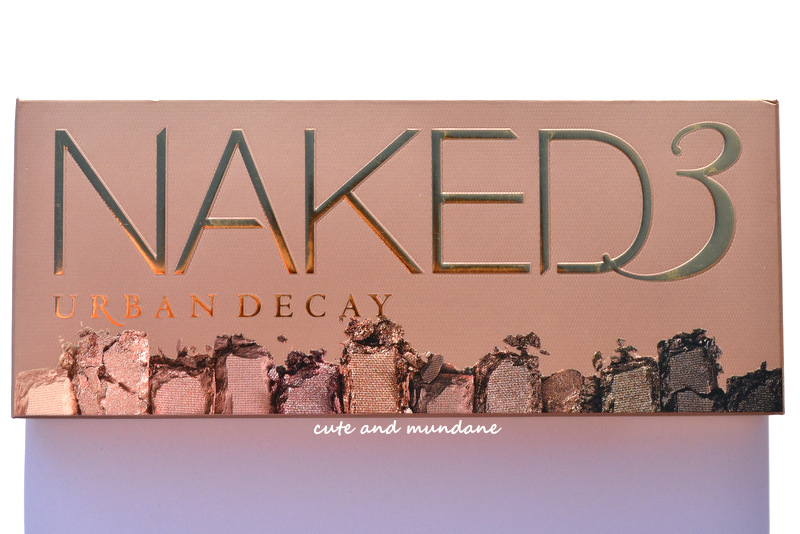 I'm a fan of the general organization of shades from light to dark, which wasn't the case in the past NAKEDs. The inclusion of more matte shades, including a base white, is much appreciated too! I've written more detailed thoughts on each shade below. 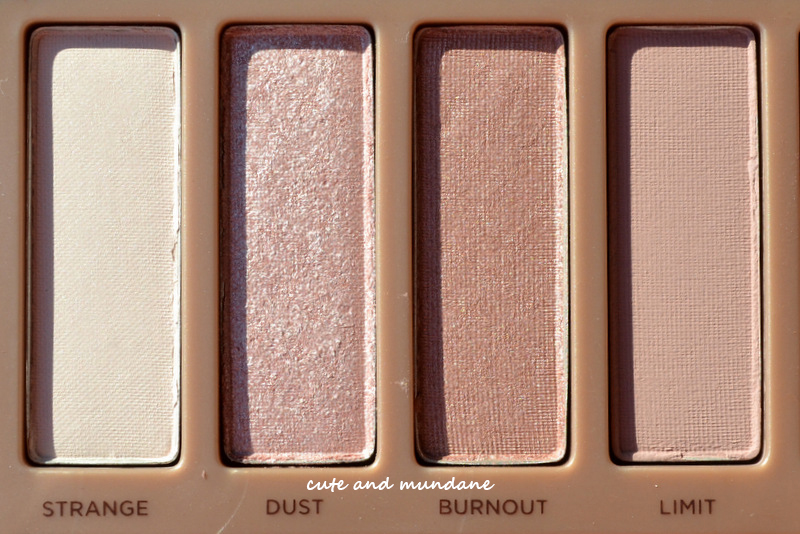 I like to dust a matte white/cream tone all over my lids as a brightening base, so I was happy to see Urban Decay Strange included in the palette. It has an ever-so-slight satin sheen, which is fine by me. The next three are light and lean a bit peachy. To be honest, I'll probably get less use from them as I don't usually go for light peachy shades. Urban Decay Dust, was unfortunately a bit dusty for me (per its namesake). It's a pale peachy pink shimmer. Urban Decay Burnout is a slightly richer peach shade with considerable sheen. I found Urban Decay Limit to be a great matte kid, however, it's almost invisible on my skin. I'll probably use it to soften lines. 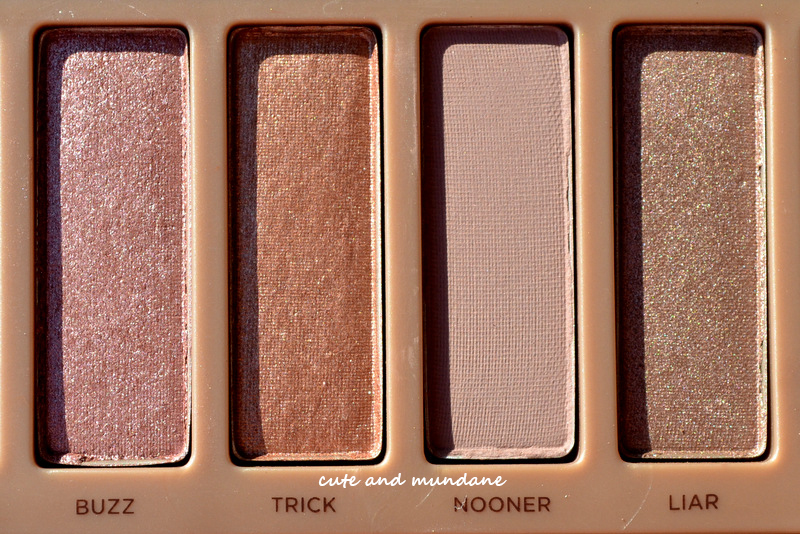 Urban Decay Buzz is an unexpected favorite of mine. At first I thought it had poor pigmentation since it wasn't showing up well on me. Then I realized it was simply because the shimmery pink mauve blended in so well with my skin! It adds a beautiful pink glow to my lids. Urban Decay Trick might do the same thing for warmer skin tones; it has a nicely pigmented orange-copper glow.  I already know that Urban Decay Nooner and I are going to be BFFs. This slightly cool mauve brown is a perfect blending color for me. Urban Decay Liar is a wonderful mauve-brown with a beautiful sheen. 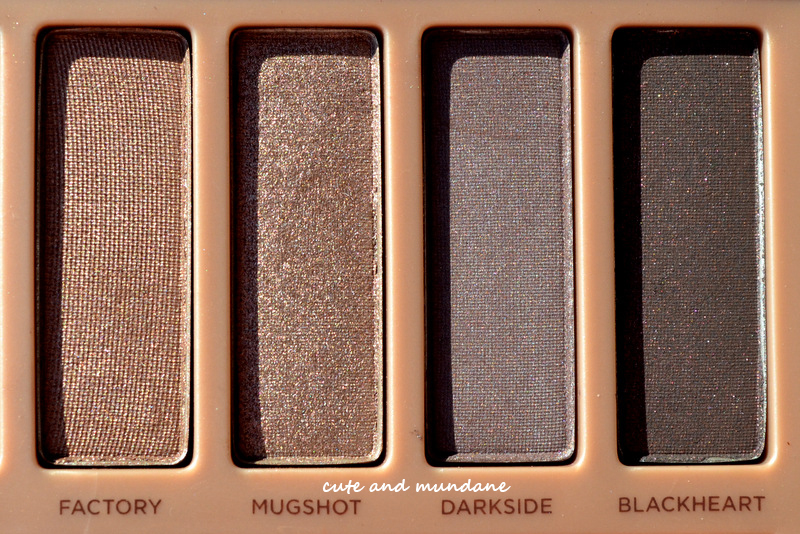 There is a wonderful range of medium to dark neutral shades in the palette; though they might not look it at first glance, they all have mauve to pink undertones. Urban Decay Factory is a brown with slight pink undertones and a satin finish. Urban Decay Mugshot is a taupe brown. Urban Decay Darkside is a mysterious looking grey-taupe that leans a bit mauve. Urban Decay Blackheart looks stunning in the pan. When blended out, the pearl is lost and I get a soft black liner shade instead.

I've swatched all twelve shades from Urban Decay NAKED 3 below. The palette may look slightly warmer and less pink on me than others' swatches, as my skin naturally pulls out some of the pink tones. (Whereas, on warmer skin, the shades might actually look pinker and cooler). 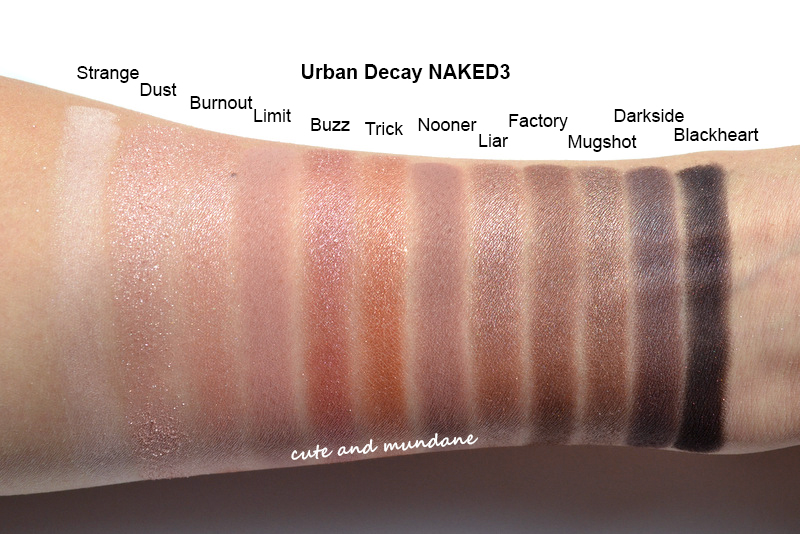 The verdict on Urban Decay Naked 3? For me, it's love. I could see Urban Decay NAKED 3 becoming my favorite of their palettes. As I've mentioned, the shades seem to meld beautifully with my skin tone, and frankly, it's hard to find neutrals with rosy or mauve undertones (trust me, I'm always looking). My current favorite shades are Strange, Nooner, Buzz, and Blackheart.

For others, I think it depends on your expectations. Urban Decay NAKED 3 is relatively neutral and should be wearable on most skin tones. It's a good fit for the current climate, when subtle pink tones are trending. However, as I've mentioned, even neutrals have trends (and trends do pass); it's something worth considering if you like to think long-term.

Thanks for reading! Have you tried Urban Decay NAKED 3? Which shades stand out to you most? Do you have a favorite out of the three NAKED palettes?