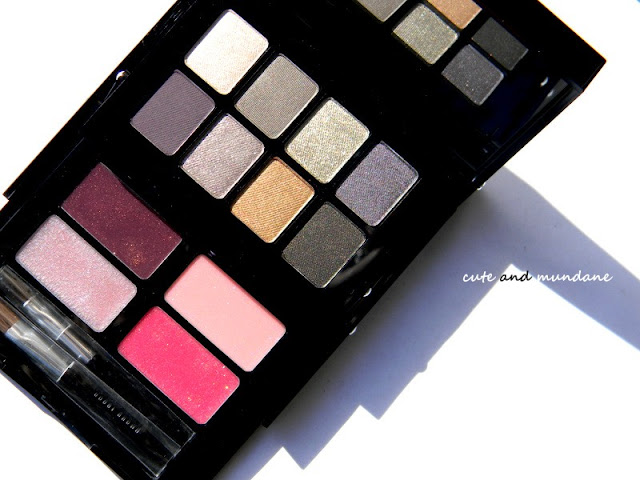 I just received this palette in the mail this weekend, so I haven't had much chance to play with it yet before I share these pictures. However, I thought people might want a peek sooner rather than later! The cardboard packaging has a silver sheen that is characteristic of Bobbi's holiday products (as opposed to the usual black). 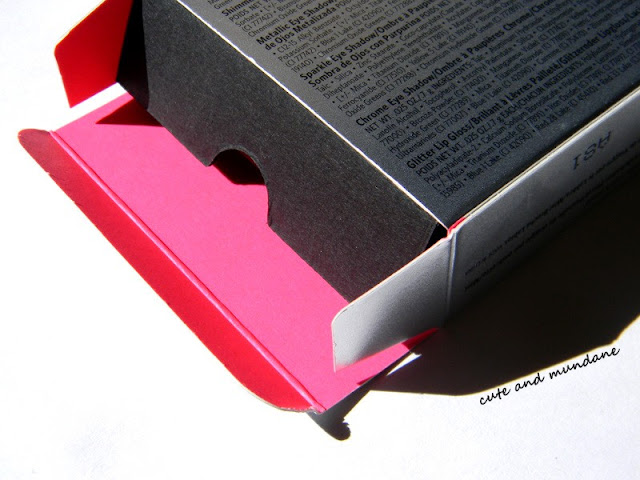 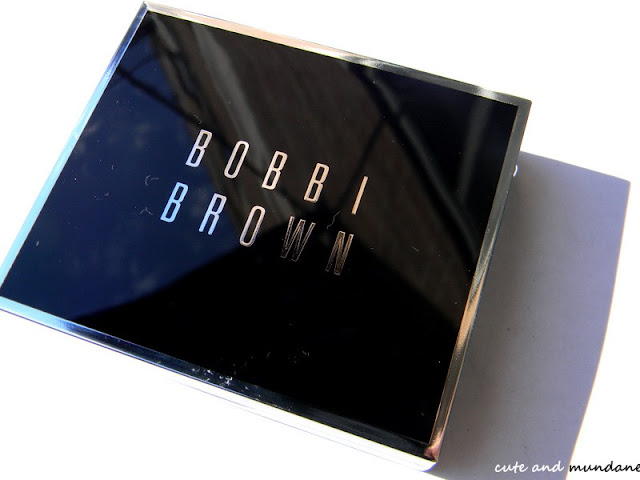 The mirrored lid opens to reveal an upper tray of eyeshadows. 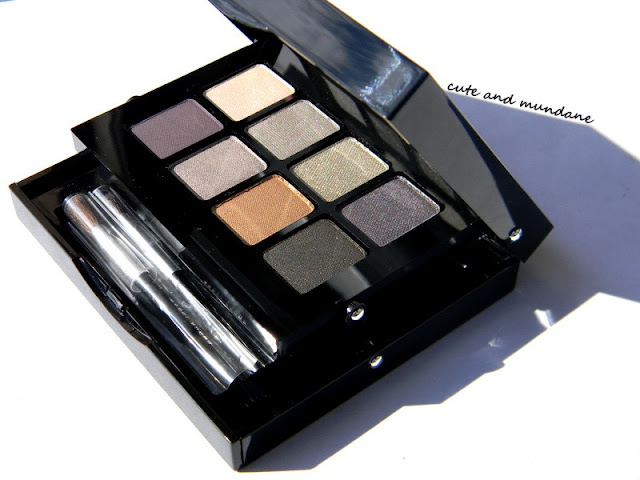 The bottom drawer pulls out to reveal the four lip glosses. The eyeshadows included are Navajo (Metallic), Chrome Patina (Shimmer wash), Pewter (Chrome), Plum Steel (Metallic), Plum Navy (Eye Shadow, aka matte), Crushed Granite (Sparkle), Antique Gold (metallic), and Black Topaz  (Metallic). It's a great selection that would make for a nice neutral/cool smoky purple eye. I love the matte version of Bobbi Brown Navajo, so I'm happy to see the shimmery version in this set.  It's a nice highlighter. Chrome Patina is a pewter-y silver normally found in Bobbi's metallic cream shadow range. I have the cream version too, and I'll try to post pictures of that in a future post. Pewter is a color that was released as a full-size shadow in holiday 2009. I've regretted not purchasing it, so I was excited to see it in the palette. Today I used it in combination with Plum Navy. It was so pretty! I'll probably pair Plum Steel with Crushed Granite tomorrow, and Antique gold with Black Topaz the day after that.

The quality and color are wonderful, as I've come to expect from Bobbi shadows. My only complaint is that each pan is so small.  The size of the shadows in this palette are the smallest I've seen yet. They're significantly smaller than the 6-pan party palettes in Bobbi's Holiday 2011 collection. I don't have the Chrome (Holiday 2009) or Modern Eye and Lip palette (Holiday 2010) to compare, but the pans seem smaller, based on my memory. However, this is just a guess. I haven't ever hit pan on a shadow, so this isn't such a travesty. 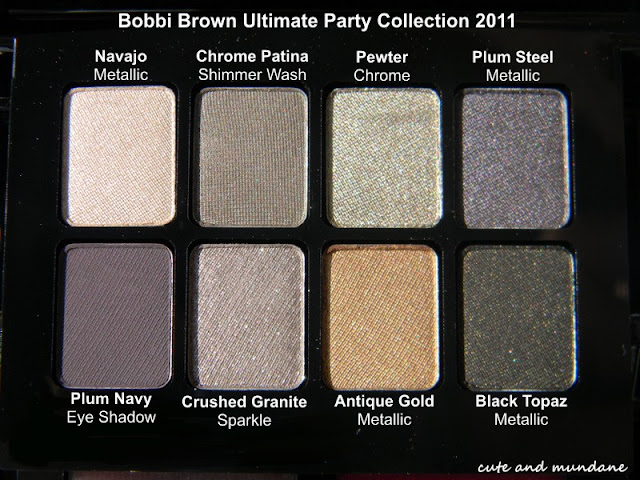 There are four lip glosses. The colors are Rave, Soiree Pink, Iced Lilac, and Tinsel. These glosses are more generously sized than the shadows. You can see swatches below. Bobbi's pan glosses are a little different than the tube glosses. I find the tube glosses to be tacky in texture and more opaque. The pan glosses are sheerer and a little less tacky. If you have fuller lips like me and don't like your glosses to have mirror-like shine, these glitter glosses are a nice compromise. They add a nice natural sparkle. 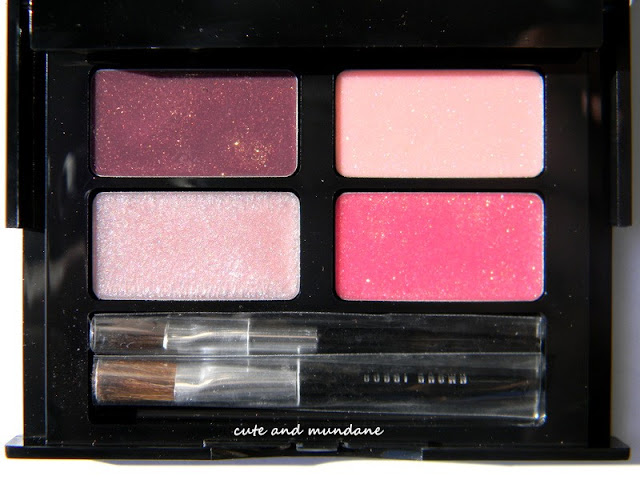 Two mini brushes come with the set: a mini eyeshadow brush and a mini lip brush. These brushes are much smaller than the typical Bobbi palette brushes. The handles are more or par with the width of toothpicks than normal brushes. The head of the eyeshadow brush seems longer and thinner than Bobbi's normal eyeshadow brush. The lip brush seems quite fluffy for a lip brush. When I first saw it, I wondered if it was supposed to be a second eye brush. It looks very different from Bobbi's normal lip brush. I haven't tried either yet since I've been using my full sized brushes. I will update the entry when I have more thoughts. 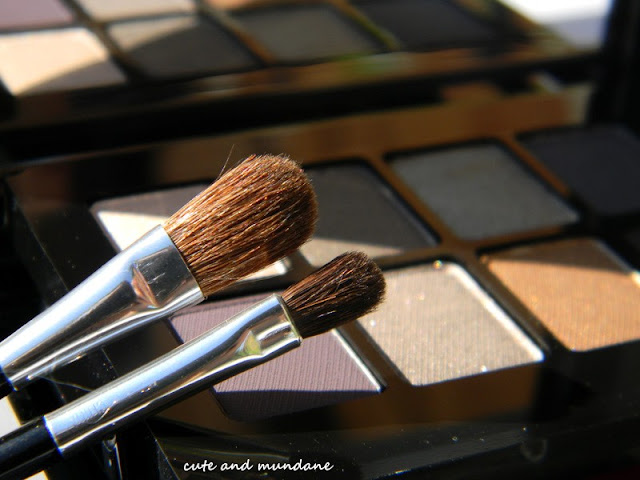 Finally, here are swatches of the glitter lip gloss. I didn't have time to swatch and photograph the eyeshadows, but I hope to do so this weekend. I will update the entry with more photos at that time. 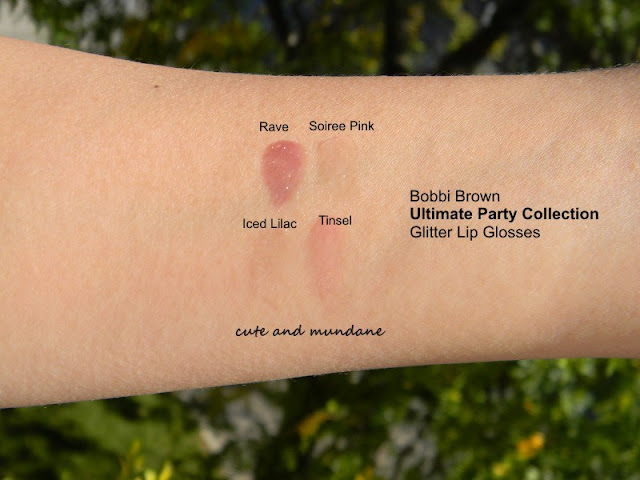 Overall, I think this the Bobbi Brown Ultimate Party Collection palette is a really nice set. The eyeshadow colors are subtle and gorgeous. I like them a lot better than the ones in Bobbi Brown combo palettes from years past.  I like the finish of the glitter glosses too. I can't wait to play with my palette more this week. I'll update with more swatches, thoughts, and comparisons when I have time. Thanks for reading! Are you getting anything from Bobbi Brown Holiday 2011? What other holiday collections are you anticipating?