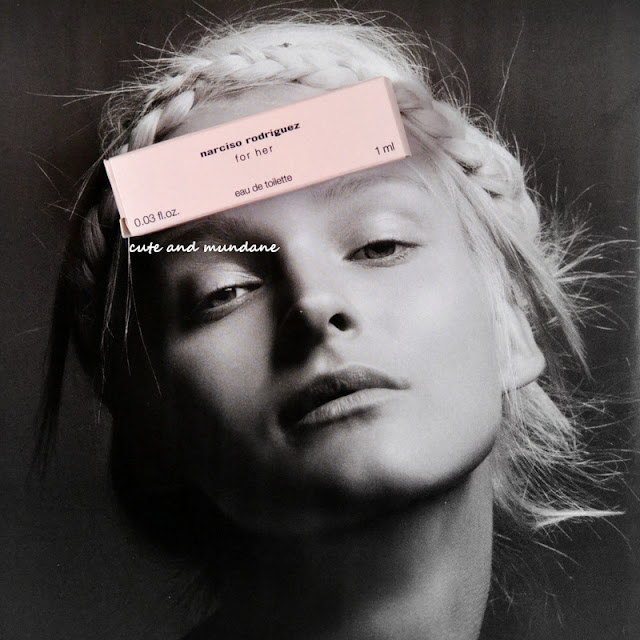 Narciso Rodriguez is an American designer of Cuban heritage. His work is characterized by clean lines and forms expressed through a minimalist palette, an aesthetic that intimates beauty through its refreshing simplicity. (You might have caught me admiring the Narciso Rodriguez Fall 2013 runway on last week's Friday Five). I have a fondness for his line, having had a personal encounter with a gorgeous Narciso Rodriguez dress for the Allure Beauty Blogger photoshoot last year (see here). Recently, Narciso Rodriguez for her Eau de Toilette has been blipping on my perfume radar, so I thought I'd home in on this scent today.

In Narciso Rodriguez for her, it seems as if someone has turned off the treble and amped up the bass. Most perfumes are fruits and flowers accompanied by whispers of musk; Narciso Rodriguez for her is a velvety musk accompanied by whispers of flowers and fruits. For her opens with a savory floral honey burst, followed by a rich tea scent with a drop of orange mixed in. After a pause, amber appears to tickle my nose and is subsequently replaced by a clean wood entangled with vetiver. At the end, I reach a gentle vanilla with a hint of amber remaining. Overall, the construction seems quite linear. All the elements (honey, tea, vanilla, amber) have a similar soft and radiant warmth. Each element fades in and out before the next, much like soft pulsations. And as mentioned, musk smooths over the entire scent; it starts out soft, then crescendos at the end. Musk is the most animalistic of base notes, however the musk in for her has a synthetic feel which keeps the scent clean. Unfortunately, the final dry-down is a bit strong for me; the musk starts to have an unsavory plastic edge as it warms on my skin.

When I sniff Narciso Rodriguez for her, I sometimes get a sense of déjà vu. Perhaps it's because the fragrance is essentially a personified version of a typical floral musk dry-down. However, Ari from Scents of Self also mentioned to me on twitter that for her is known to be quite similar to Sarah Jessica Parker Lovely. 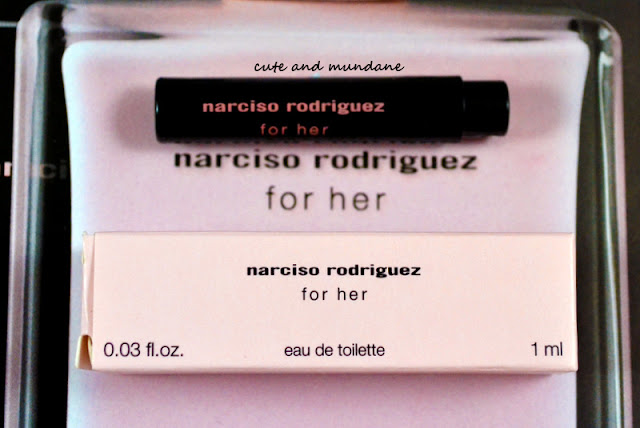 The juxtaposition of heavy musk with pulsating honey, tea, amber, wood, and vanilla elements give Narciso Rodriguez for her a warm, velvety, and confident touch. The streamlined simplicity of the scent reflects the brand well, however it could be called a bit monotonic (and you must like musk!). I can see how Narciso Rodriguez for her could be a signature scent. For me personally, it's a situational scent at best, as I'm prone to musk overdose and I'm fond of more vignettes in my fragrances. Thanks for reading! Have you tried Narciso Rodriguez? Is it a yea or nay? Do you like base-centric fragrances?