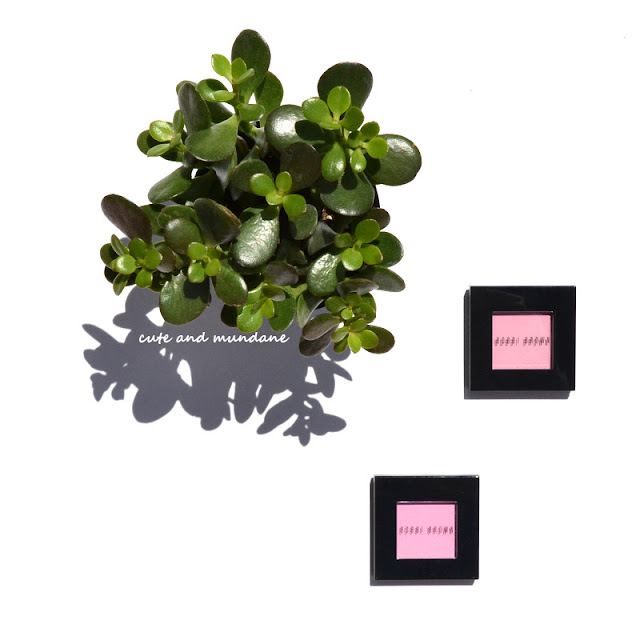 I hope everyone's weekend got off to a great start! I managed to check off a few things on my to-do list, including an intense yoga session, picking up the Harper's Bazaar beauty issue, and planting the mini herb garden! (It's got flat-leaf parsely, rosemary, sweet mint, sweet basil, and lavender, in case you're curious). Having had such a great day, I figured what could be better to end on than typing up a blush post? Today I'm sharing my review of Bobbi Brown blush in Nude Pink (29) and Pastel Pink (33).

If I recall correctly, the first blush I ever owned was Bobbi Brown's Desert Pink (which, by the way, is still a part of the permanent lineup). The brand has an amazing blush lineup, especially if you're talking natural, photo-friendly mattes. What I've noticed recently, are more light pink options - perfect if you're a light pink aficionada like me. When asked about what Bobbi Brown products I'd like to try, I had to go with Bobbi Brown blush in Nude Pink (29) and Pastel Pink (33)!

Before getting into the colors themselves, I thought I'd mention the Bobbi Brown interchangeable palette system. To date, it's still my favorite customizeable palette system (after all, it's one of the originals). The colors easily pop in and out of their cases (see above) and what's nice is that the name label (on the back of each shade) travels with the product into the palette, so I can easily reference them.

To give you an idea of size, I have palettes in 2,4, and 6 pan sizes. My mom has this awesome 9-pan palette that was a Neiman's limited edition from way back. How great would it be to have an entire 6-pan palette filled with Bobbi blushes? (It's next on my bucket list...) 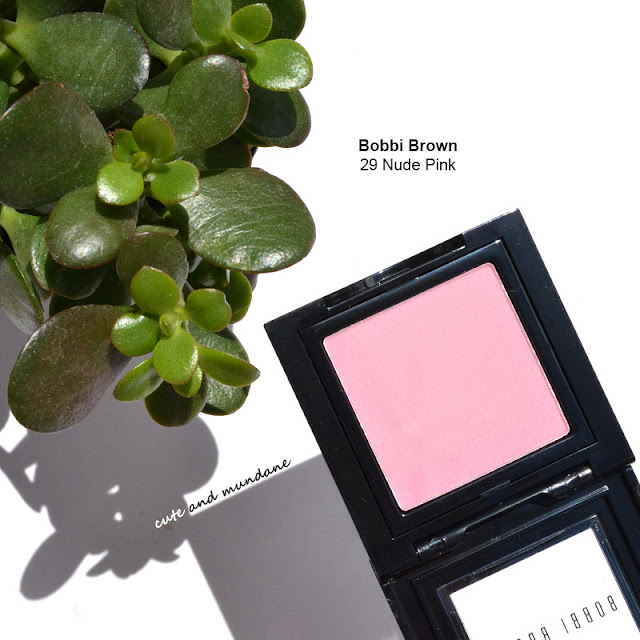 Bobbi Brown Nude Pink is described as the 'palest pink'. To be fair, it is one of the lightest shades in the lineup, but I'd probably say it's more of a clean, light pink. The formula is pigmented and smooth. 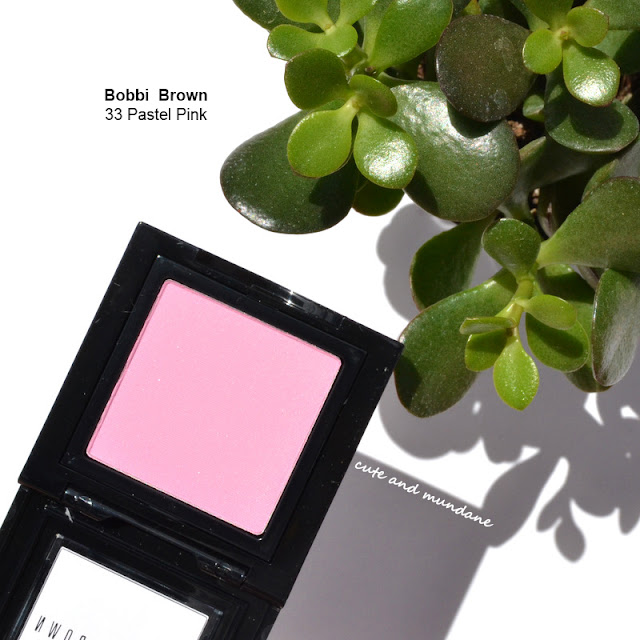 Bobbi Brown Pastel Pink is one of the newer shades in the blush lineup. It's described as a 'light pink lilac'. I don't notice an overt lilac tones, but it definitely is a cool-leaning light pink. This has the same smooth pigmentation as above.

I'm actually glad I have both blushes to show you, as they look quite similar at first glance. If you look below, it's easy to appreciate the difference between the two. Bobbi Brown Nude Pink is a touch warmer and perhaps more natural (hence nude), while Pastel Pink is cooler and touch brighter.

I've swatched both shades below, next to a couple of my favorite pinks. For the record, my arm is probably two shades tanner than usual, thanks to my recent trip to the Floriday Keys - so keep that in mind when comparing this to previous posts.

Because I have a good amount of pink undertone, I tend to gravitate towards cool pink shades. Both NARS Gaiety and MAC Peony Petal (reviews linked) are among my everyday kind of pinks. (They look a bit stark here since swatched heavily on my tan...).  As you can see, Bobbi Brown Nude Pink and Pastel Pink are cool, but not as starkly cool as Gaiety and Peony Petal.

I'd say the difference between the two is more pronounced (vs. in my swatches) when worn. Bobbi Brown Nude Pink has a more natural finish, while Bobbi Brown Pastel Pink is pinker and brighter. As you can tell from the swatches below, both have the natural feel that Bobbi is known for. 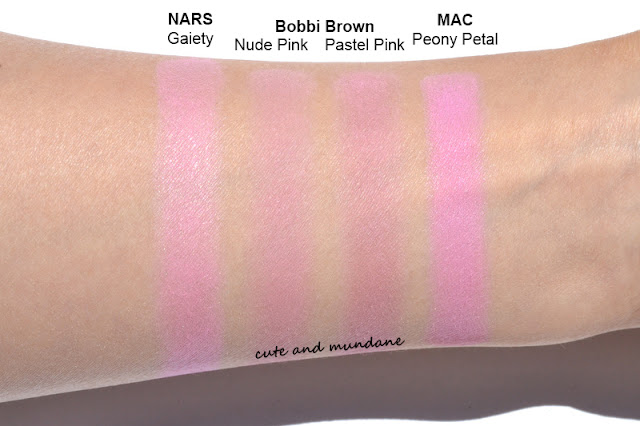 Both Bobbi Brown blush in Nude Pink (29) and Pastel Pink (33) are gorgeous shades, especially if you're a fan of light pinks, like myself. I love how soft and natural both look, and can't wait to incorporate them into my routine. I'm really happy that Bobbi has added more light pink shades to the permanent collection. I've already got my eye on 'Pale Pink', 'Peony', and even my old favorite 'Desert Pink'!

Thanks for reading! What Bobbi Brown blushes do you have in your collection? When it comes to blush, do you prefer pinks or peach/corals?

P.S. I'm working on more of my new Bobbi Brown basics, so expect more in the near future!
Disclosure: This post contains product(s) sent to Cute and Mundane for consideration. The ideas and opinions in this post are genuine and my own. As usual, no ads or affiliate links!
Posted by Dovey at Saturday, May 16, 2015